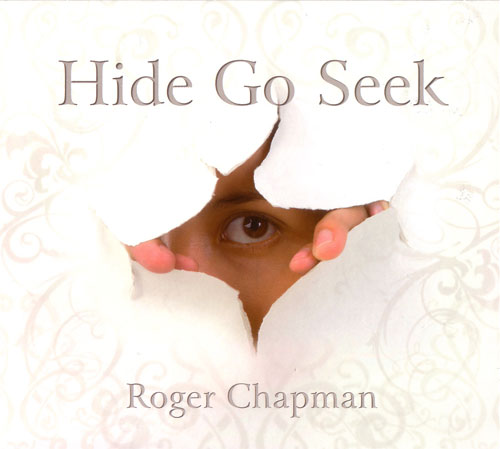 Hide Go Seek, the new Roger Chapman album, will be released in the UK on 5th May and in Europe on 8th May. It is a double CD set, released by the Hamburg based Hypertension Label and features  28 tracks.

The double CD, close on 2 hours long, is very diverse, featuring a collection of previously unreleased songs, demo’s and alternative versions of tracks already featured on other albums. Asking Roger about the work that had to be carried out to turn what was already ‘in the can’ into Hide Go Seek, he explained:

“There were no ‘Added Extras’, just cleaning up stuff. i.e. ‘topping & tailing’ tracks. Being demos they would have all kinds of stuff on –  beginnings & ends, count ins, rough fades, F`ing & blinding, piss takes etc. Then of course came  the difficult job – the running order. Gee whizz, what a marathon trying to put 28 tracks in order, drove me  mad. Played the real thing yesterday & still want to change it! The record company made me stop `cos I was going on & on – as is my want of course.

All the Cregan stuff, except for Devil & Wings which we did a couple of years ago, we did together in L.A. about 14/15 years ago. Get this, we were trying to write a ‘Family Theme’ album, but then as managers moved on we moved on. Naked Hearts was actually written for a movie about Loch Ness but missed the boat. We wrote it over the phone, London to LA, me humming & Jim writing. He then recorded the back track in his studio in LA, sent it to me where I recorded the vocals in London while recording the ‘Wicked B`s’ & ‘Bring me Your Love’ demos. Anyway, it was a writing thing really, I went there for 3 weeks especially for that reason, to meet up with Jim for a serious writing session. As you`ll know some came out on ‘Kiss’ & some on ‘Stone’.

The rest contain hours & years of me & Stevie in various studios & houses around London. There are also out takes from sessions as far back as ‘Chappo’. Also obvious ones from ‘Cat’. I just hope they`re enough for people to enjoy & have an idea of what goes into our making music. It`s not just write something, record it, wham bam, there’s so much more to it. Whole life changes, thought processes & styles for people through so many years.”

Order the new album from Amazon.com