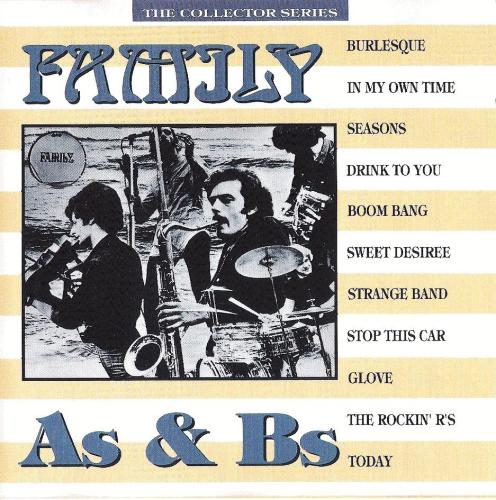 A collection of the singles released by Family between 1969 and 1973, this CD is an interesting release. I would call it essential for the completist, but by no means a good sampler of Family’s work. Singles-wise Family was a completely different band, and I must say I prefer their album cuts. After a few listenings this CD came off as a lighter side of the band. The acoustic styles play a big role on the first few cuts, and that’s kind of strange compared to the eclectic music that was on their albums at the time. Then again, this is the Family that was packaged to sell, not the songs in which the band really cut loose. NOTE: The German Line CD’s add many of these tunes as bonus tracks. The only songs not found on German Line CD’s are “Song For Lots”, “Stop This Car”, and “Drink To You”.

The singles before these recordings included pre-Family “Scene Through the Eye of a Lens” (which has been released on the See For Miles compilation of Music In A Doll’s House/Family Entertainment), “Me My Friend/Hey Mr. Policeman”, and “Second Generation Woman/Hometown” (“Hometown” is found on the Line CD It’s Only A Movie and the 1993 CD Best of Family). As for the others, they were tunes released to advertise the albums. After the band had come into their own (and quickly, I might add), they could join the many bands of the early 70’s which straddled the fence of album releases and single-only releases. They would return to the album-cuts-as-singles strategy, albeit with non-LP b sides, towards the end of their career, probably in an effort to again push the albums.