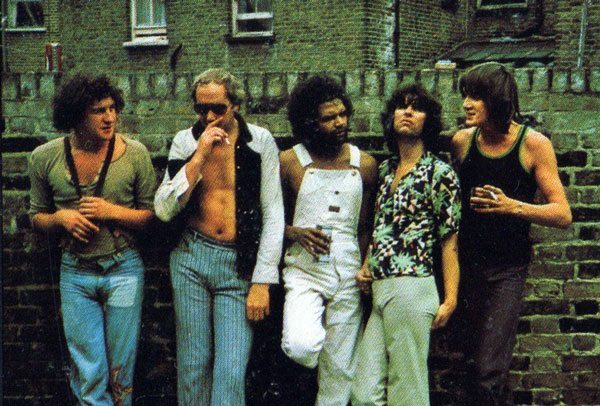 Family’s six-year career was wrapped up with a farewell album and tour in 1973, and it wasn’t long after that Roger Chapman and John “Charlie” Whitney jumped right back into the game. The main songwriters of Family obviously had more to say musically, but felt that the Family name and image had run its course. In my opinion, fans and critics associated Family with 60’s hipness, and the band’s 70’s works were heard as attempts to reclaim the heights they had reached. In the Streetwalkers period guitarist Charlie Whitney’s playing consists of a lot of slide playing (lap steel), while Roger Chapman’s voice entered a new stage. It wasn’t as self-destructive as before, but remained gruff in the style of raucous soul singing. 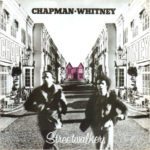 In the winter of 1973/1974, only months after the dissolution of Family, Chapman/Whitney completed a duo album called Streetwalkers with a loose collection of famous musical friends. The album was released in May 1974, followed by a single in June (“Roxianna”/”Crack”). A touring oufit was formed using Bob Tench on guitar, Tim Hinkley on keys, Mel Collins on sax, Ian Wallace on drums, and Phil Chen on bass. Incidentally, Whitney, Wallace and Hinckley found time to back up Tim Buckley on his 5/21/74 “Old Grey Whistle Test” session, featuring “Dolphins” and “Honey Man”. During this period keyboard player Blue Weaver appeared with them at concerts, such as the Reading Festival in the summer of 1974. Bobby Tench from The Jeff Beck Group and Hummingbird was also featured in their fluid, informal touring band line up and appeared at concerts such as in Hyde Park, London, the same year.

Some tryout gigs were performed, including one at Leicester Polytech. In August more gigs followed: the Reading festival (second on the bill, under Barclay James Harvest) and London’s Hyde Park festival. Faithful correspondent Jonathan Inglis says of this outdoor gig…

…the concert was excellent, what I can remember of it. They did a fantastic version of ‘Hangman’ still one of my favourites…

In February 1975 they put together a solid backing band, and dubbed themselves the Streetwalkers. The sound was solidified by the only member of the previous line-up that they kept: Bob Tench. The rhythm section of Jon Plotel (bassist, ex-Casablanca) and the previously unknown drummer “Nicko” McBrain lent more funk, heavy R&B, and 70’s-style hard rock to the mix. Tench, McBrain and Plotel had previously appeared on a European broadcast for the German TV show Rockpalast with Chapman and Whitney earlier the same year, billed as The Chapman Whitney Streetwalkers. In October they released Downtown Flyers (known simply as Streetwalkers in the US), and toured the UK and Europe, where they became quite popular. “Raingame”/”Miller” was released as a single. The band did not achieve the anticipated success in USA, although interest in Europe was more encouraging. 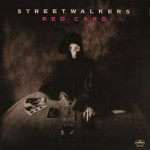 The band cut Red Card in May of 1976, but this lineup was broken up by July; “we wanted a tighter rhythm section” according to Chapman. The single for this album, “Daddy Rolling Stone”/”Hole In Your Pocket”, came out in June. The band performed at a series of concerts entitled Who Put The Boot In appearing at UK Football stadiums, during May and June 1976. The billing for these concerts included The Sensational Alex Harvey Band, Little Feat, Outlaws, Widowmaker and Streetwalkers were the last act to appear before The Who performed. 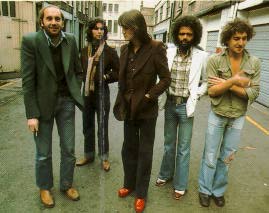 On 12 June 1976 they made their first appearance for John Peel on his “Peel Sessions” recorded by BBC radio, with the line-up of Chapman, Whitney, Tench, Plotel and McBrain and would be featured by Peel once more as a “Peel session”, on March 14, 1977. 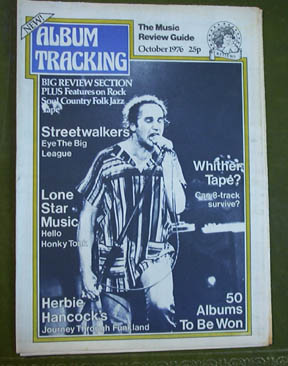 The band returned in September of 1976 with a new rhythm section (David Dowle – drums; Michael Feat – bass) and a full time keyboardist, Brian Johnstone. A short European tour before a UK debut at the Roundhouse. Chappo still had manic stage-presence, and on December 19th there was yet another legendary occurrence when he fell off the stage and broke his foot, spending Christmas on crutches. He finished the show, of course!
They put out their last studio effort Vicious But Fair in January 1977, but by then their label Vertigo had shifted their commercial emphasis to the musical trends of Punk rock and New Wave music. On April 19, 1977, they made their final appearance on Rockpalast, with a line-up which included Chapman, Whitney, Tench, keyboardist Brian Johnstone, bassist Mickey Feat and drummer David Dowle .The euphoria surrounding the band began to diminish and the potential of becoming more established in Europe evaporated and by the end of 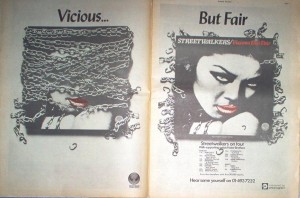 the year the Streetwalkers had disbanded. A posthumous Streetwalkers Live was released in December. It included a rough and ready compilation of poorly recorded tracks, probably released to comply with contractual obligations. In his review of this album for All Music, John Dougan mentions the poor quality of the recording and states that: “Chapman tears off a few soulful moments and it can rock”. Chappo says of the breakup: “I can only repeat what I said when Family broke up… It’s just time to start working on something new, with different guys.”
And in a 1980 article by Dave Seal for UK fanzine Nuggets , Chappo reported that the band manager, Michael Alfandary, caused a number of problems, building friction up with an originally very sympathetic record company and generally doing a counter-productive job. Roger summed up the final split concisely:

“There was no friction between the members of the band. The only friction was with the way the band was being run. It just got completely . . . boring, we just felt like we were getting on stage to play act the role. There was no point in doing it”. 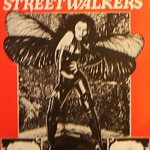 Even though the sound had been remarkably different, the Streetwalkers could have easily been the next chapter of Family. It would have made for an even more diverse career.
David Dowle (drums) and Brian Johnstone (keys) went on to tour with David Coverdale’s Whitesnake from March to April 1978. Dowle stayed on through 1979. Nicko McBrain (drums) worked with Pat Travers and then went on to Iron Maiden in 1982. Bob Tench moved on to work with Van Morrison. Charlie Whitney and old Family-buddy Rob Townsend formed Axis Point for two albums. Roger Chapman began the solo career that he has continued to this day.

The Best Of Streetwalkers

“Daddy Rolling Stone/Hole In Your Pocket”

Still Dizzy After All These Years 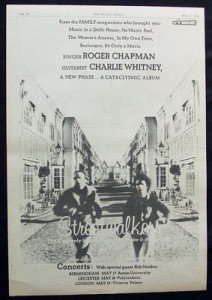 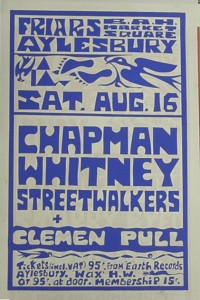 09 MAY 1976 New York, Roslyn, My Father’s Place cancelled due to Roger Chapman’s laryngitis 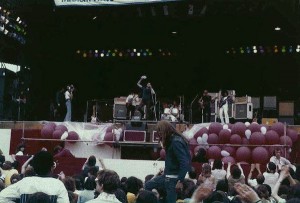 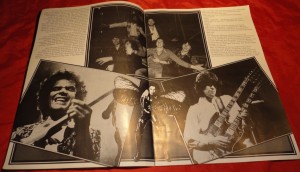 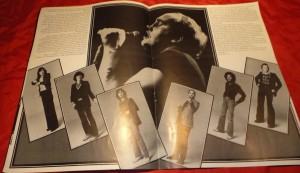 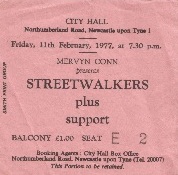 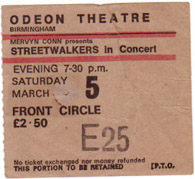