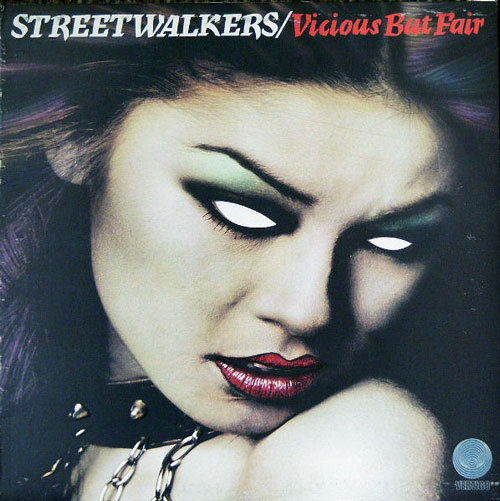 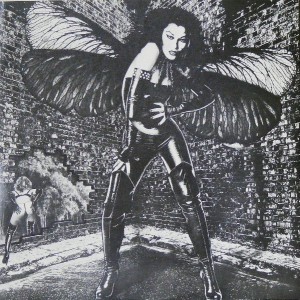 This was the last Streetwalkers album, and as good as they were, I think they had run their course. A final lineup now, with a new rhythm section and a full-time keyboardist, Brian Johnstone. Album covers a lot of ground, and is dynamic: vicious, yet fair.
1. “Mama Was Mad”
One of the top Streetwalkers riffs gives this song its takeoff. Nice funky syncopation, lots of breaks in between the notes. Strong keys from the now-permanent keyboard position. Kind of a weak bridge, and I never know where it’s going. Back into a lean and mean solo. Fade out with a piano solo spot.
2. “Chilli-Con-Carne”
An extremely melodic tune that was the single for this album. Good sax work from Mel Collins, and it was a good thing they had him as a friend. The monster guitar riff behind “Ain’t nothin’ better…” sounds a lot like the famous Clapton line from “Badge”.
3. “Dice Man”
As I said above, this does get spread a little thin, but there are a number of sections or themes that segue well. It just seems to never end. Chapman’s voice, even though it is multi-tracked, has a lot of character and is as unique as ever. Both (!) of the quiet middle sections build with a thoughtful guitar solo, and then kick into double-time. Nice string section throughout. I’m sure they REALLY stretched it in concert.
4. “But You’re Beautiful”
The preceding album, RED CARD, was all-electric, so this is the first quieter number in a while for the band. A touching slow ballad of lost love. Female backup on the choruses, and excellent Mel-sax as usual. Classic Charlie 12-string, just like the old days. And Poli Palmer is credited with synthesizer on this, but I honestly can’t pick it out. Maybe that flutey sound towards the end.
5. “Can’t Come In”
Back into the funk-fray, and there’s good rockin’ tonight. Love the “Big Bass Man” in this one. I thought Charlie’s lap-steel was in this; the first solo may be just regular slide. It really is hard to tell where Charlie’s playing ends and Bob Tench’s begins. Oh there it is, a lap-steel part at the end. Yummy!
6. “Belle Star”
A tune written solely by Whitney, driven by a quiet clavinet in the back. Nice volume-swelled guitars in and out. With lyrics including “Delta Blues”, “Cajun Moon” and “Bayou Bay”, I think we have a good idea of where Charlie’s head is! Just another bloody Englishman who wants to be a Delta Bluesman. 🙂 Quickly blends into…
7. “Sam (Maybe He Can Come to Some Arrangement)”
Thickly-strummed 12-string chords, and this is the tale of a gambler down on his luck. A somber tune, but I think most of the sadness comes from the fact that Bob Tench’s second vocals make a one-time appearance for this album. Just a shame; his under-utlized voice gives me the shivers. It gets a little more bouncy towards the end.
8. “Cross Time Woman”
The last studio track from the Streetwalkers combines a lot of textures. Some dexteritous piano, acoustic guitar, funky bass, and a veritale chorus of Chappo’s. Mel Collins’ sax comes in for some soprano solos, and there’s organ and synths also. The outro bars are the best… some resonating strings and great backing vocals. Combines the edgey-feel of Streetwalkers with a deep sense of melody. 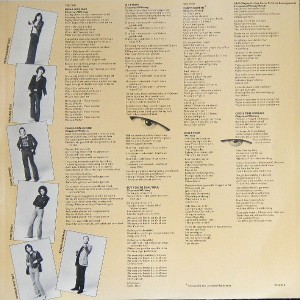 Mama Was Mad
Running down the road, women on my tail
A beat-up Ford on a lonesome trail
Peg-Leg Annie’s gonna scratch out my eye
She in league with the devil but don’t ask me

But you end up sleazy, peepin’ through keyholes on your bended knee
But you can’t be easy, they’ll bust up your head and steal your keys

I’m running down the road, women on my tail
One of these bitches gonna put me in jail
The sheriff o’ the county wants me held on a rap
I sped through the border with a gal on my lap

I’m coming in smooth, man, have I got a line
I’m holding her hand, she’s eating out of mine
And I look in those eyes I’m sure to impress
Gonna Razzle and Dazzle her right outta that dress

Oh a place in the corner, a candle and mood
Where I can touch her with small talk, some drink, and some food

Well I’m getting suggestive to see if she’s game
When, she drops to her knees and looks at me strange
I say “Listen here honey, what’s eating you?”
She say “Move over toots, it’s me eating you.”

Mm, mm, one candle and mood
I touch her with small talk, some drink, and some food

Rolled out a number, low and crapped out
The crowd around me are starting to shout
Demanding some blood, a price for my head
I feel I’d be so better off dead

For taking my beans, making honky-tonk Queens
Swarm ’round me like a cowshit pie
Making me loose, drinking Tennessee juice
I’m in your debt so cast your die

Roll me a seven, or make it eleven
Give me a good luck charm
Gimme a break, no eyes of a snake
A gypsy woman magic charm

Roll me a number, roll me them bones
Roll ’em away, the crowd and their groans
Roll me a winner, show me a sign
Roll me a good luck time

Oo, but you’re beautiful
Given time – you’re gonna meet someone to change your mind

Oo, but you’re beautiful
Ah, old in size – but still young enough to wonder why
Where have gone the eyes that shone
A broken angel just because

It’s all over
Over – over

Belle Star, there you are
Turning my night into day
Cajun Moon, Clair de Lune
Shining on anyway
Over a Bayou Bay
Lighting this summer night
Making me feel alrightBelle Star,drive my car
Turn up the radio
Delta Blues, Highway Dues
With no other place to go
Just lettin’ the feelings flow
Hoping that this won’t end
Just when I’ve found
A New Friend

Belle Star, there you are
Turning my night into day
Cajun Moon, Clair de Lune
Shining on anyway
Over a Bayou Bay
Lighting this summer night
Making me feel alright

Sam (Maybe He Can Come to Some Arrangement)

Sam the man, he cut the cards
And blinked across the room
Trying to cut the smell of smoke and booze
And stale perfumeHe dealt around the final hand
Knowing he was hot
That final game he cried in shame
That he’d learnt to count the cost

They took him to a downtown pound
Threw him in a cell
A drunken heap, he felt so
Weak as well

She’s got a 3 legged old dresser
Standing drunkered but tall
She wouldn’t ask a lesser man
To hold it all… ‘case it fallsShe keeps alla’ these dresses
And her wraps and silken robes
It’s a fact she’s pretty obsessive
About her finery, oh and clothes

Cross time woman, I’d been starin’ after you
Starin’ after me, and we both knew
That I was hot for you
I could feel you were cookin’ too

She got diamonds by the bedside
She got silver on a tray
Got so many she wouldn’t miss ’em
If I stole ’em, where they lay