…or the ‘hassles’ side of festivals

FOR groups, particularly the newer ones, the advantages of festivals are that they can be short cuts to the top. The disadvantages re: the backstage hassles, not so acute at the bigger well-organised events, but becoming increasingly frequent since “Woodstock” set the cash registers tinkling in the minds of amateur and small time promoters who can see no further than a stage and a field as festival requirements.

The hassles are the side the audience don’t see and as Family guitarist John Whitney pointed out after his group had clashed with the organizers of the otherwise well run Rotterdam Festival last week: “The kids judge you on what they see, on what you do in your 45 minutes or so. They aren’t to know that you’ve been up since 6 a.m. travelling and have been waiting backstage three hours to go on.” 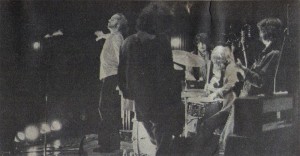 Family ought to be authorities on festivals. There was a period of about 12 months or so when they were on the bill of almost every major one going, and if festivals didn’t exactly maketh Family, they certainly helped get their name put about to goo deffect.

This year, since their return from America, the group has been easing off the British scene and looking to do through festivals on the Continent what they have already done here.

Last weekend saw the finale to several three/four day sorties into Europe before the group -split for a hard-earned holiday. I suppose I should have recognised when I was invited along with them to Holland
and Belgium that family outings follow a pattern, whether it’s a big or small “f” involved.

The pattern is rain and invariably getting lost and we had an abundance of both. Only at Amsterdam on arrival was it sunny and the outing did look as if it might be interesting when the customs officer on hearing our destination remarked with a glint in his eye: “The boys and the girls they are undressing themselves.”

The group was still smarting from hassles at a festival in Germany the previous weekend when, relying on the promoters’ promise that a car would be laid on to take them to their hotel for a meal. they’d gone straight to gig on arrival.

The promise failed to materialise and Family had been left to wait out eight angry hours, without food, before playing their set.

Their intentions were made clear to the Dutch guide but, unfortunately, the message didn’t get through to her until we were almost at the festival site after driving from Amsterdam and by the time we arrived at our Rotterdam hotel the journey had taken over twice as long.

When we later arrived at the site, a forest clearing at the end of a road flanked by tents and puddles, it was cold. dark and miserably wet.

The hubbub of British voices backstage seemed to suggest predominantly British organisation and the Jeff Dexter-impersonator acting as compere did, in fact, transpire to be Jeff Dexter.

The crowd was around the 150,000 mark held in on one side by a huge lake on the arc light waters of which a pair of ducks were gently bobbing around quite probably stoned by the downbreeze over the crowd…

The Byrds were completing an excellent set when we arrived and were to do three encores. Fotheringay, not appearing until the third and final night, had come along specifically to see the legendary American band and when the rain and difficulties of getting outfront forced them to retreat into the marquee dressing rooms met up with Family.

Woodstock, the film of which has made as much impression in Holland as it has here, was obviously being relived in some people’s minds.

One youth even found consolation for the rain. “It rained on the second day of Woodstock man. That means on the third day there will be mud,” he recited in a biblical tone.

Most of the American bands had already gone on earlier than scheduled in order to catch ferry back to England and Family, originally due on at 10, were told much to their displeasure that Country Joe had now been put in before them.

It was around two a.m. when Family finally got on, their anger put aside for the set but flooding back when on the very first note of “Weaver’s Answer” a torrent of rain chose to descend. And it really did descend.

Standing on the stage at the back, where great puddles of water were gathering on the canvas roof and dripping on to the stage, the view out was a miserable one. With each individual speck of rain glinting in the arc lights. the allusion was of a mighty net curtain draped across the front of the stage giving occasional glimpses in the darkness beyond of huddled-together hapless hippies.

Family’s set second number “Drowned In Wine” carried a certain irony but what else can a band do in such circumstances except carry on. So on they went, doing “Strange Band,” the title track from their upcoming single, and “A Song For Me”, featuring solos from the three Johns, “Willie” Weider on violin, “Charlie” Whitney on guitar and ” Poli ” Palmer on vibes.

It’s only when you watch and listen so closely that you realise the tremendous excitement Family’s distinctive brand of rock generates and even after the downpour, which was easing off by the end of the set, they were being called back for more.

But Family weren’t having any more and went straight from the stage to their cars. In the cool light of day they would admit that the kids weren’t to blame but you don’t tell that to a group as steamed up with resentment as they were.

But they were in no mood to let this disappointment hang over them. Thoughts were or the three-week holiday coming up which, according to Rob Townsend they are in urgent need of.

“When we were in the States Roger was getting pains in his head and seeing a doctor. We all had them to some extent; we were all near to nervous breakdowns.

“We haven’t had a holiday since the band started and should really have had a break when we came back from the States, but we didn’t… we had already committed ourselves.”

In their case, it is a question of working themselves too hard because Family functions according to its name. Tony Gourvish is the young manager who took over after the group’s managerial difficulties of last year but he is only one of six directors in the company that controls the group, Bradgate Bush Ltd. The other five are Family and the board meets once a month, not under standard boardroom conditions, to vote on matters regarding the group.

A recent decision concerned the new Family single. The group had remixed some of the best tracks from old albums for an American LP “Old Songs New Songs” and Warner-Reprise their record company, wanted the new version of the brilliant Whitney-Chapman number “Weaver’s Answer” issued as a single in Britain.

“We couldn’t get that idea together,” commented Chapman. “We wanted • Strange Band • as a single – a new number – so we reached a Family compromise.” The compromise is a three track single playing at 45 rpm comprising the previously mentioned titles plus a remixed “Hung Up Down.”

It will be interesting to see which will be the promoted track. Warner-Reprise say “Weaver”; Family say “Strange Band.”

When we finally got into Belgium, after getting lost in Rotterdam, we ran into rain again and arrived at our destination, a small town called Ciney, 70 miles from Brussels, around tea time.

“We’re down to playing garden fetes now,” said one of the band on seeing the gig. It was a bit of an exaggeration but nonetheless a strange booking which transpired to be a talent contest for local groups which Family were to round off.

Held in a marquee set up in the pretty village square, groups had not only each other to compete with but the church bells as well.

Our hotel was an old, rambling chateau, the kind of place the young couple go to for shelter from the thunderstorm in Hammer films.

The meal was highlighted by female kitchen staff peeping round doors at us eating and the, rooms turned out to be incredible… as big as Earls Court bedsits and full of the kind of old furniture just about returning to colour supplement trendiness.

The audience at the show was in stunning contrast to the previous day’s… King’s Road as opposed to ultra Kensington Market. Family, with their minds more I suspect on their holiday than this freak gig did their bit well enough.

Returning to the chateau at two in the morning all was in darkness and it took 45 minutes of bell ringing, door banging, rattling and shouting before the staff were raised from their sleep.

At Brussels the next day we allowed an hour for the 15 minute drive to airport, only for both cars to get predictably lost and for us to arrive hot and frustrated two minutes after our plane had left.

We got a later flight – and in London it was raining.