Skip to content
by Martin Hayman
Family’s Poli Palmer lives in a Fulham basement, and a notice by the bell reads threateningly “Don’t ring before midday unless you have an appointment”, which is a bit like “Abandon hope all ye…” even though I had an appointment and it was after midday. 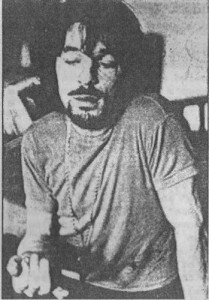 Once inside it’s all smiles and no daylight. In the front room, curtains are drawn back to reveal – not a double window but a vast console of electronic gear. Two Revox tape machines, two ECS Synthi-A’s, a pitch-to-voltage converter, a synthesiser keyboard, a vast Sansui amp with a battery of controls, a Leak tuner. Stevie Wonder’s synthesiser masterpiece flows out from the massive IMF monitors. This is Poli Palmer’s workshop. You may have noticed on recent Family gigs that the sound from Poli’s vibes are – well, different. The notes blend and warp and every now and then he makes a lightning adjustment to his control panel. This is where he learns it all: demurely tucked away by the console is a little “Teach Yourself Orchestration” volume.

So what is all this to do with Family, who after all are one of Britain’s oldest purveyors of rocking soul music? Well, of course, it’s partly for Poli’s own diversion. It’s something he started getting into no more than a year or so ago, and he’s still a little paranoid that the machines are going to take over.

So although some of his Moog stuff appeared on their last album opus “Fearless”, it was introduced without any flourish and kept strictly in it’s place. They preferred to under-record it as electronics are only a means rather than an end. Pol is contemptuous about overuse of synthesiser… At the moment Pol is restricting use of the synthesiser to modulating the tone of the vibes, though the future may see it featured more heavily in Family’s music…

[Years ago] He struck up a friendship with Jim King, and when he left the group Pol had already become a confirmed drinking accomplice of Roger Chapman. Although Pol came in to replace one of the founder-members of the band with a completely new instrument, he soon worked out a musical working relationship in the band.

It’s a process of give-and-take: “If you have a gig and John [Wetton? or Charlie (misprint)] is having a bit of trouble and he’s really not into doing any soloing, then I’ll probably do most of the soloing. He’s quite content, because it’s not his night, to play chords all night. It’s the same with me, say I’m having a bit of trouble balancing the synth or something, then Charlie’s [or Roger???] singing away. I think we all believe that that’s the most important thing if you’re in a band – the band sound.”

An album is nearly completed to follow “Fearless”: what remains is to make a decision on how best to finish it off. Both strings and brass are on the cards. But make no mistake, Family will not be kow-towing to anyone else’s idea of what their music is going to be.

[Palmer:] “The best way to record is just to use your own influences and be fearless about it. All the things you’re interested you can draw on… people are never totally original, it’s impossible. I think people who are most original are those who take all their influences and make it into something that’s totally them.”