a new series, NME takes FAMILY back to revisit their LEICESTER roots…

Just before they left for their current U.S. tour, NME took the three founder members of Family on a nostalgia-tinged trip back to their Leicester home town.

“Y’see, to us, it’s just a place to go home to and feel a bit normal – have a jar with some old mates.

“The music scene that we came out of is dead and all the old clubs like ‘The House Of Happiness’ where we worked out the Doll’s House album is a turf accountants now. All the little live music scenes are gone, ‘The Back Door Club,’ ‘The Oodly Boodly,’ ‘The Night Owl,’ and ‘The Burlesque’ have all been pulled down.”

The last-named “Burlesque” is, of course, the subject of Family’s current single and it was back in 1965 that their manager Tony Gourvish used to work the clubs as Tony Esquire (known less reverently to the locals as “Gobi Gourvish” due to his gift of the gab) and sat on the seat of his Lambretta with all the aplomb of a man who had a mink collar to his anorak.

We arrived at Charlie Whitney’s house in North London to embark on our pilgrimage with the other two Family founder members, drummer Rob Townsend and Roger in the pouring rain. They were recovering from a recent festival and looking worn…

“I’d had three hours kip before my dog woke me up by bouncing all over my head and then Carol tipped me out the door and told me off for not waving to Daniel,” said Rob with reference to his wife and baby son and added morosely, surveying the weather, “So we’ll tell you when you can make jokes!”

Townsend and Chapman used to attend the same local schools, “All Saints Juniors” and “Ellis Boys”, after which Roger became a steel fixer and Rob went into the printing firm of J.W. Winterton as a lettering artist.

Whitney’s parents were circus people in the acrobatics department and this loose connection with the entertainment business was sufficient to make up his mind when he was told to either give up his rock group or the Leicester Art College.

After a brief run as a window cleaner which terminated when he got his ladders “knicked”, Charlie started up a local agency called “Klock” for bands like “The Broodly Who,” “Veeble People” and “Wot Dat Dere.”

Meanwhile Rob Townsend was visiting the “Roaring Sixties Club” and, witnessing The Farinas play Sonny Boy Williamson and Chuck Berry Material, was sufficiently impressed to want to join and was offered a job.

Before joining the Farinas in the mid-sixties, Chapman had been singing around with a number of small bands like Denis and the Rockets. He still retains a certain notoriety for once having beaten one Arnold Dorsey alias Gerry Dorsey alias Engelbert Humperdinck in a talent competition at the Palais.

It is rumoured that Roger had strong local support from a contingent who canvassed the hall before it came to a show of hands, suggesting persuasively with clenched fist that “Chapman’s all right!” and “Chapman ain’t bad is he?” to the voters.

Chapman won by a landslide!

Apart from Rick Grech who was, of course, in Family’s early band there are a few other Leicester musicians like Zoot Money, Tony Kaye (ex-Yes) and the legendary local vocalist Jim King, who dressed in old army greatcoat, trilby hat and played harmonica on stage with the Farinas. A prototype Ian Anderson.

“The problem with Leicester is that it is middle class minded with nothing going up but new office blocks,” said Roger. “It’s not a poor city – there is a lot of money here but not much sense of adventure. 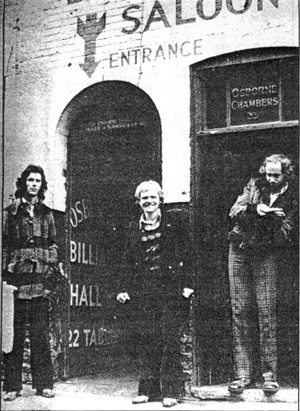 “In London you can dream of becoming a star and even have a remote chance of becoming one – in Leicester a girl is thinking about getting married at 17 or leaving.

“If they achieve anything here for young people it will only be on a sports level. I think they’re working on the possibility of holding the World Cycling Championship here – things like that.”

It should be mentioned that Family are football freaks and it was inevitable that we would wind up posing like a squad of army deserters outside the Leicester ground at some point.

On the last occasion I met the group we were playing in the pouring rain (it always rains on Family) on astro turf somewhere in North London in a grudge match against Pink Floyd Academicals in a game where Roger snatched a dramatic last minute equaliser to make the score three all.

We walked down to the Leicester City Football Club ground and stood around self-conciously in the cold wind outside while Bob shot a few frames and then went with Roger and Robin [“the Raver”, a local DJ] back to his house on the outskirts of Leicester.

Roger settled down in the front room on some cushions, back against the wall, TV on with the sound off and the stereo on. He looked at home.

“We’ve got two months of gigs with Elton John in the United States coming up,” said Roger. “Fifty gigs all over America on a make or break tour for us. Jesus I’ll be glad to get home again!”

3 thoughts on “Article – Family Back Home”