“WHAT’S happening to Family?” is a plea that’s had frequent airings over the past year or so among those a little baffled that a group with such talent could apparently get stuck on the same rung for so long. Rightly or wrongly, they’ve acquired a kind of Cinderella image on the progressive front.

In fact, it’s an illusion. On the popularity side Family have been far from standing still and their current “A Song For Me” album – at No. 6 in this week’s NME LP chart – is positive proof that musically they’ve advanced several rungs. 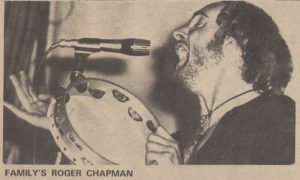 It’s not neck-sticking-out to suggest that this could be Family’s year.

With ex-Animal John “Willy” Weider snugly integrated on bass and violin and newer boy John “Polly” Palmer making like an old boy on “Song For Me”, they are more together now than ever and have long since shaken off any fears of being pushed into pop history and remember solely as the group Rick Grech left to join Blind Faith.

One of the band’s early drawbacks – some would say it’s an asset – was their insistence on playing only their own music… brilliant, distinctive music, but music without instant commerciability and needing a lot of digging for the goodness to come out.

“It was a selfish attitude in the early days,” recalls vocalist Roger Chapman, “but in the end I think it did us a lot of good.”

Family came down to London from their native Leicester in January 1967, when the Underground was in its infancy.

“In Leicester we didn’t know anything about it to be honest. But that was the thing – all that we did came naturally. It was the first time groups were able to go out and play all their own material.

“All of us, no matter what bands we have been in, we never followed the trends at all. We always did what we liked and our aim was to make it happen. It didn’t always at first.

“Down here we did things like UFO and the Roundhouse and it was good. Up North we’d be totally different from what the audiences expected. But we used to say ‘… ’em!’,

“I don’t think we have ever bent to people; we have been able to make audiences bend to us.”

As far as standing still goes, I can’t imagine anyone less prone to immobility than Roger – a bustling, creative livewire who fronts Family on stage and off. His individualistic vocals and dynamic delivery go a long way towards making the group’s much-talked about stage act.

Roger’s now 27; a stringly six-footer who resembles a younger Frederick (he who sang with Nina) and entered pop after an unglamorous spell as a steel fixer on building sites.

He’s been singing since the age of 15, starting in talent shows, and in his home town casually knew Engelbert Humperdinck. He has a story to tell against Enge but told me only when I promised not to print it. He didn’t want it used to get publicity.

Chuck Berry was the first influence on his vocal style. “It really got to me, that rhythm thing he had. I never knew how he got it, but it just made me feel… good. I used to play a bit of tenor sax but it was singing that I always really dug.”

Flattered
He’s flattered when told his voice sounds like an instrument. “That’s the way I like to think of it. Not just as a person standing up and saying words in a different key. I like to use it as an instrument. A guitarist likes to see what kind of melody he can put out. I like to do the same thing. I probably never sing the same melody every night.”

The group would welcome a hit in the singles chart. Their last, “No Mule’s Fool”, just failed to make it.

“If we have a hit, just by that one thing we can reach a hell of a lot of people,” says Roger. “At the moment we are not near the popularity of Tull.

“What is the use of playing music and only trying to please a certain kind of people?

“We have made a lot of people accept our music. We now want to reach a hell of a lot more.”

And as for the old “selling out” chestnut, he comes back quickly with: “You can’t say I dig Family one day and the next say you don’t any more because they have a hit single.

“People grumble about always having the Trems on TV and say why can’t we have Jethro, Nice or Ten Years After. Then when one of them gets a hit and get on TV they are blagged for selling out.”

Undoubtedly Family are best in the “live” form and they still get an enormous kick out of performing.

Says Roger: “The thing I really dig about our band is that when we go to a gig we have an incredible thing between us and the audience.

“It is not like we are the band and they are the audience… with a gap between us. We can play any town in the country and personally be on nodding terms or friendly with about ten per cent of the audience.

“I promise you that however long we go on as a band we will never give up the clubs. We’ve always had this kind of audience and we don’t want to lose them.”