SUCH are the tribulations of creative folk that the occasions when a completed piece of work meets all demand of it are few and far between. There must be a great many musicians who listen to their old recorded works and wish they could have a stab at doing them all over again . . . thinking how much better it could have been had that guitar break been ethereal instead of heavy or that little triangle riff dainty instead of fuzz-boxed.

Family are, more than most, a perfectionist band and they did get a chance – an opportunity to “rehaul” some of their old tracks-thus explaining how a two-year-old number has given them the chart single that their productiveness and musical ingenuity have long deserved. The number is “The Weaver’s Answer,” a rock classic of some distinction, which has been the promoted cut for TV and radio off the group’s “Strange Band” three-track single. 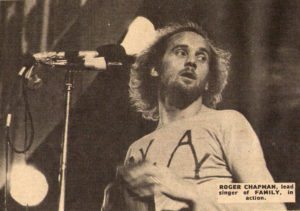 As rock connoisseurs will know, there are few more inspiring experiences in music than Roger Chapman and Family freaking out on
“Weaver ” – to this day a standout of their act – so when the band needed to compile a “Best Of . . ” collection for the American market the old “standard” was obviously on for a dust off.

As it stood on the “Family Entertainment” album however, the group was far from happy with what had been achieved.

“It’s a very insipid track on ‘Entertainment’,” asserted Family drummer Rob Townsend when the group met the NME at their manager’s London flat. Neither Rob nor Roger Chapman could be described as leaping about with joy at the prospect of a sales biggie but behind the coolness, it can be revealed, they are well chaffed all the same.

First time “We recorded ‘ Entertainment’ when we were with our old manager ,” Rob went on. “We were up North doing gigs and he mixed the tracks while we were away. He didn’t know what we were about, wasn’t there when we recorded them and didn’t know what we had in mind for them. We’ve been bugged by those tracks for a long time and when the American album came up we took the chance to remix and redo them.”

The “rehaul” for “Weaver” consisted of an added guitar track and fresh violin by John Weider (the original was by Rick Grech) . It was then completely remixed, as were all tracks for the album, which was needed to tie- in with a projected September tour of the States.

The situation has changed since then; the U.S. tour has been put off until next year and the group has now decided to put out the album titled “Old Songs New Songs” in Britain too. (See centre news pages for details and list of tracks). Though they’ve been after singles success for some time – making a slight dent on the- charts with “No Mule’s Fool” – Family long ago gave the thumbs down to deliberate chart aimed releases in favour of a policy of issuing only what they liked , in the hope that it would be found commercial. That in mind they had earmarked the new Whitney-Chapman composition “Strange Band” as their next single Warner-Reprise, having heard the remixed tapes, thought otherwise .They wanted “Weaver” ; until heads were put together with the result the three-track single , the third cut being “Hung Up Down” – remixed with two extra guitar tracks and flute by Polly Palmer .

And although the last I heard was that Family were sticking out for “Strange Band” to be the promoted track – Warner Reprise had already agreed it should be the title cut – the record company was equally adamant about “Weaver. ” And eventually, it seems , they carried the day.

As John Weider put in an appearance at the flat, I asked Chapman and Townsend if they hadn’t left themselves open to criticism for releasing a number that was two years old.

“Yeah but we could have said no,” argued Roger, going on to agree: “Yeah we could be open to criticism but it is still our music. It is Family music none just as it was then, and if it wasn’t commercial two years ago but is now, then it must be the audiences that have turned round.”

“You are bound to get criticisms all the time,” took up Rob,” like the sell out thing. You get these people who dig certain people because it is the thing to do. They are the ones who think you have sold out . Most of them don’t know what they are talking about.

“Like, we had some people saying we had become a jazz group since getting Polly on vibes. They were saying Family is very jazz-tinged, they’ve got jazz vibes on stage . But Polly is a rock and roll vibes player, nothing else.

“You always get the odd few who come out with things like that, but for the few who say you have sold out there are 200 to 300 who haven’t heard you before and are turning on to the music for the first time.”

Honest Band
Family are first and foremost an honest-to-goodness music band with no truck for pretentiousness, and a discourse around the Isle of Wight Festival, showmanship and attitudes, led manager Tony Gourvish into the assertion that his group could be that much bigger in status if it would go in for the “Hey you cats, dig our music” line of thought.

Roger had been putting down Keith Emerson’s showmanship at the IOW with Emerson, Lake and Palmer (flashy suits and cannons fired from the stage) and, after agreeing with Gourvish, also the Moody Blues “rap” to the audience about having trouble with the Establishment. At that gathering, from behind the left ear of our esteemed editor incidentally, Roger was heard to bellow a good old English curse toward the stage. He explained “How can they talk about Establishment? They are the… Establishment; I mean they’ve got their own record company and label.”

Roger did agree though , that there was a certain degree of showmanship and playing to the gallery in every act – that their prime job was to entertain – and that there was a thin dividing line between taste and tasteless pretention.

By now, John Whitney and Polly Palmer had appeared, with the living room beginning to take on the appearance of waterloo at rush hour. A convention of huddled heads was called to look over suggested covers for their new album, after which Roger sped off in the direction of his weekend haunt, Leicester.

The album entitled “Anyway” after a favourite Family word, will be released at the end of October and consist of half studio tracks and half live cuts from the group’s Croydon concert in July. Though they now have enough material to fill, they are still cutting new tracks to widen their final choice.

It is the first time they have recorded live and the group feels that this way they may finally have caught the true essence of Family’s music for disc.

They haven’t been over happy in the past with any of their albums. Apart from the previously discussed “entertainment,” “Music In A Doll’s House” was thought to be too fragile sounding and polished while “A Song For Me,” the nearest to it so far, was hampered by the fact that Polly joined the group near the end of recording and had only a week to put down all the flute tracks.

All live
“No, we’ve never really got Family sound down in a studio,” agreed Rob Townsend. “The live sound is a lot more raucous, with a lot more feel to it. The live recording of “Strange Band” from Croydon is so much better than the record. The studio tracks always seem so clear cut and polished. “But we now set up in the studio as we do for the stage, because we’ve found that we can get the best results that way. And the next album after “Anyway” will be completely live, recorded in concert.”