Skip to content
by Jerry Gilbert
Family guitarist Charlie Whitney had just returned to his Notting Hill home after a stint in the north of England.

Whitney shoved Carole King on the hi-fi and after admiring an old pre-war Martin acoustic decorating the wall and a small Hofner, specially built for playing bottleneck style, we got down to business.

Q. [In the early days] Did the band eventually come down to London on the off chance or was it all pre-arranged?
A. Oh yeah, I mean we had to come down. We did a few gigs at the Speakeasy and we played the Middle Earth. We had one record out on Fontana and that was when Jim King was lead singer. Oh yeah then we played the 100 Club with the Pretty Things and Graham Bond doing the R&B thing.

Q. How did things progress from there?
A. Well after the R&B thing we got some saxes and went more into the kind of James Brown thing. Jim used to play sax and Roger used to play sax, and Roger, Jim, and Rick (Grech) used to sing, and then there was just me and the old drummer before Rob. We used to get through a lot of things.

Q. I recall seeing you at the Woburn Festival around that time and you were starting to get a reputation as being an aggresive band.
A. Well that was probably all down to Roger. By the time we played Woburn we’d done one single for Liberty and I can’t remember whether “Doll’s House” had come out or not. Probably not, but in any case we were certainly playing all the stuff off it at the time. We were well into writing by then.

Q. How does your songwriting partnership with Roger work?
A. It works in a lot of different ways. Maybe I’ll come up with something complete with music, the whole bit, or maybe Roger will. If we’ve worked together I usually do the music and Roger does the words but it’s not all that often that we do work together. It’s an agreement we’ve got that we’re both credited.

Q. When Willy Wider [!?!?] left recently he left a big gap to fill, how did you go about replacing him?
A. We weren’t trying to replace him exactly. I mean we weren’t into violins anymore, and we were looking for someone who could sing and play pretty well. Ken (John Wetton) is a good singer and he’s a good bass player. He’s a more basic bass player and he’s also playing some guitar and then sometimes Poli plays bass on the vibes. We’ve not done any of Ken’s songs yet but he will be writing, and he’s also an excellent pianist, a beautiful pianist.

Q. I’ve always thought of you as being the link man in the band somehow – the man who makes sure it all happens.
A. I don’t know, I seem to get lumbered with counting in the numbers and giving the cues, and so on. Whether it’s because I write the songs, I don’t know.

Q. Looking at the albums, which is the most satisfying recording you’ve made?
A. I like “Fearless” for a lot of reasons. I think it’s the best production. But there are just certain tracks off certain albums that I like. I don’t think there’s a best album.

Q. Well assuming there was a “Best of Family” album which tracks would you like to see on it?
A. Er… “Lives and Ladies”. I think that’s one of the best as a song. “Drowned In Wine”. “Weaver’s Answer”. “Part of the Load”… I can’t think of any more. We will have to do “Weaver’s Answer” on stage and funnily enough we’re asked for “Peace of Mind” but we don’t do that one.

Q. Why did you bother to remix the tracks from your early albums and then put out the album “Old Songs New Songs”?
A. Well initially it was done for the States because we had a tour booked and we didn’t have an album so it was a good idea. But then the tour got cancelled and we thought it would be nice for over here. There may be another one. I mean I think the last one introduced a lot of new people to Family. You know, our audience is getting younger and I don’t know how these kids can afford albums these days. You notice how young they are when they come round after the shows. I mean it’s nice to think that we can go on stage and play without having to compromise and they’ll listen to it and dig it… and they’re young, which is nice.

Q. Do you think your progress has been impeded each time there’s been a personnel change? It must take time to fit into a band like Family.
A. Probably in the eyes of the public, but it’s funny because every time we change we’ve sort of come to the end of the thing with the guy that’s left and in the last few months with Will it really didn’t happen at all. I’m not saying that we were wrong or he was wrong. It was the best thing that could have happened. I mean he’s with Stud now and really getting on. 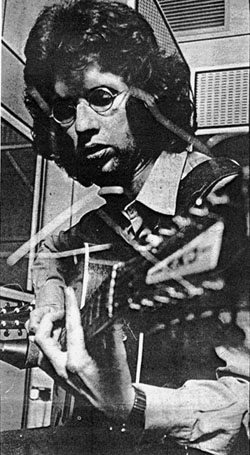 Q. Has John Wetton managed to settle into the band yet?
A. Yes well he seems to have, we really get on well with him. But it’s just a question of getting himself out properly because from the outside we must look like a very haphazard band. I mean nobody lays it down, do you know what I mean? No-one says do this or do that, you know it’s like everyone’s at the same level and I suppose that’s happened over the years.

Q. How come you’ve survived in the band right from the beginning? Has there ever been a time when you’ve thought about leaving?
A. Oh no. You know, I’m just sort of happy to write and play. I mean I like the idea of people sort of… if I can put something out to the rest of the guys in the band, that’s great. Technically I’m really nothing but they’re all good technically and so if I can put some chords their way which’ll get them off, then that’s great.

Q. So do a lot of the basic musical ideas come from you?
A. Er… yeah, well it’s because I can push something their way. I feel that people like Poli or Kenny, they’re capable of playing anything because they’ve got it together, wheras I just play from feel, you know what I mean? But that’s the only sort of role I see myself in.

Q. Do you think you’re still a little bit over the heads of the audiences? I mean do you see your status improving at all this year?
A. It could be that, but as you’ve said we’ve been around a long time and it could be just we’ve become part of the scene.

Q. How about America, why do you think you’ve failed to crack it in the States?
A. Well the first time there was the Bill Graham affair. What happened was that we were playing with Ten Years After and the Nice, and we were playing away and Roger threw his mike off the side and Bill Graham happened to be standing there and he thought he’d thrown it at him, but he didn’t. And then he sort of put the word around about us and that was it. Put it this way, I think American Reprise gave us the elbow then because they had put some money into us for the first tour but the second tour they didn’t put any money in at all, and although the gigs went better there wasn’t really any point. So really the first time we blew it and the second time they blew it.