ONE of the most powerful launches for a new group was recently laid on for the Family. Only they aren’t a new group. Says lead singer Roger Chapman: “We’ve been playing together for years, with varying degrees of success mostly around the Midlands, being from Leicester”.

Despite all the appearances of a brand-new, fresh from – the- works group, the Family have built up a strong following during the usual round of clubs, ballrooms and colleges. Throughout 1967 they played a lot of dates at Manchester University, for example. This is just one place where they were accepted on a par with the big names- and it’s been happening all over the place, winning a broad base of supporters anxious for records.

Their first album “Music In A Doll’ House” has been lapped up by both critics and buyer . It has good original songs by Chapman and lead guitarist John Whitney, inventive arrangements, and brilliant production by Dave Mason of Traffic. A lot of time was spent on it, which has paid big dividend. “Doll’s House” is a mature work.

Two of the tracks, “Me My Friend” and ” Hey Mr. Policeman” have been put out as a single release. The record hasn’t exactly stormed up the charts but it’s laid the foundation for future success, though the group prefer the wider, less restricted format of album work. Singles are really an extra.

Do they feel very much indebted to Dave Mason? To what extent was he the guiding light behind the album? Says Roger Chapman : “Of course, he’s been a great help. We started off very much under his influence, using his ideas. But as the LP progressed we found there was more and more of our own stuff coming through. He sparked us off but we know what we want for ourselves.”

The Family’s first really important show was at the Albert Hall. Although they only did the one concert of the ill-fated Tim Hardin series of shows, several critics were so impressed with their performance that they rate Family above Hardin – who was, admittedly, not at his best. 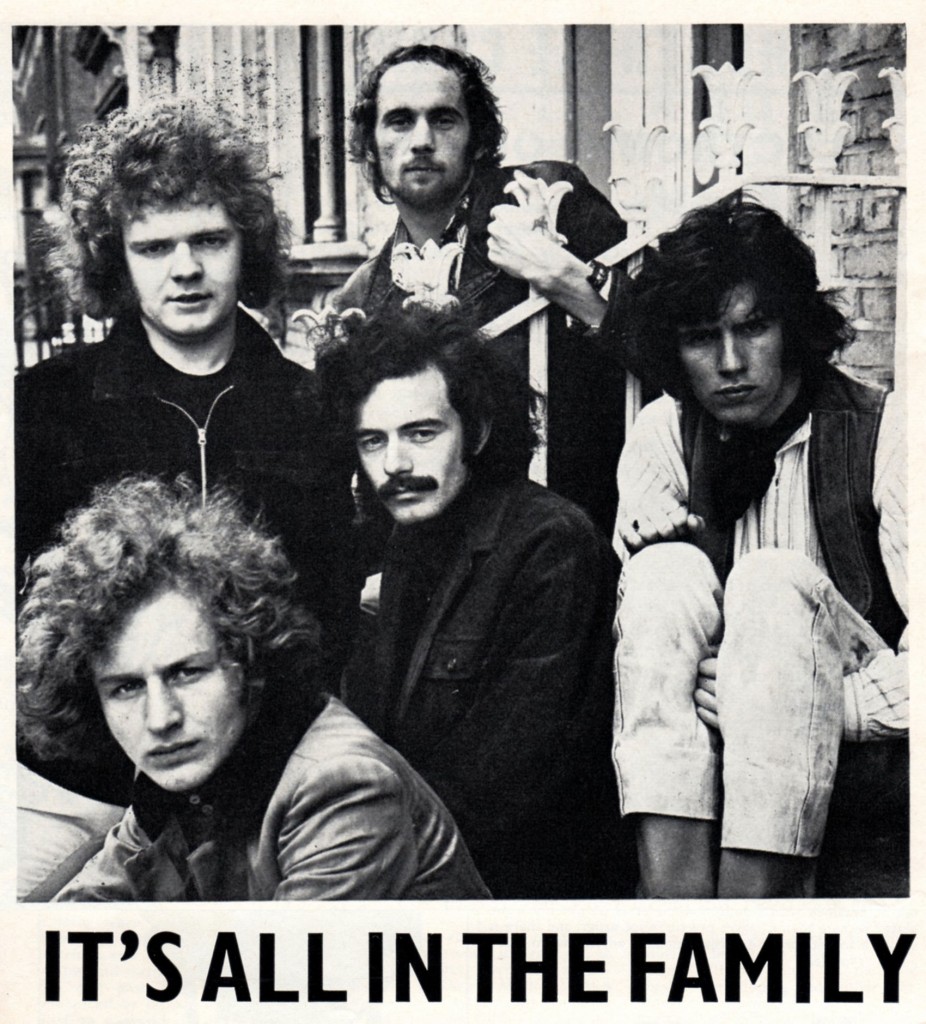 UNIQUE
Family’s line-up a far as I know is unique. Basically vocal, guitar, saxophone, bass, drums, it also feature Ric Grech’ electric violin, tremendously effective as a drone sound, crossplay between mouth-organ , axe and whistle, and the mighty sound of John Whitney’s double-necked guitar which rang out across the Albert Hall with stunning effect. For this concert they brought in a six-piece brass section, resplendent in white bandjackets, who obviously enjoyed themselves as they pumped out a full, hearty sound.

But the strongest impact was made by Roger Chapman. He strains the vibrato almost to breaking point, chanting in powerful anguish one minute, whispering and subdued the next, all the time jack-knifing his thin body to and fro. He brings real drama to singing. It’s perhaps not surprising to learn that at one time the Family were a soul band, with “high class” rock the major influence common to all the group. Roger was told that he sounded too much like Steve Winwood, though, with the result that he changed his style. There’s certainly nobody him like now.

Nor, for that matter is there another group like the Family. It’s refreshing to find a set of original musicians  who are going all out for the music they want. They don’t have any long and involved theories as to why they are suddenly causing so much interest, breaking out of the pure hippie background and coming across so strongly to a wider public. “Perhaps they just dig us” was the parting remark of Roger Chapman.