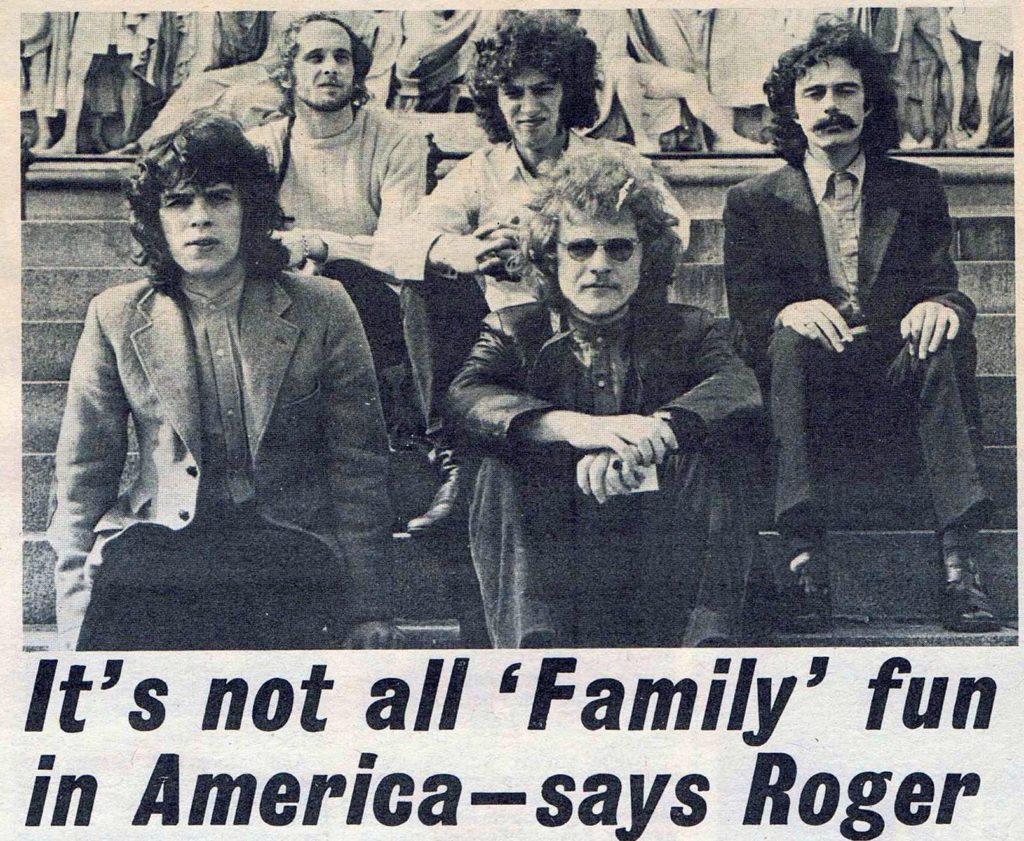 FAMILY did their first British date for some time this weekend at the Camden Rock Festival, held in London’s Roundhouse after being in America for two months. And they were glad to be back.
Said warbling singer Roger Chapman: “America was really good but it was hard work. It was worth it because we went down really well with the audiences.
“We did five weeks touring California and Boston and all the, what shall I say, tbe sort of underground dates and then the last three weeks we were touring colleges and universities, which we really enjoyed.”

Festival
Roger says the group are looking forward to doing the Hollywood Music Festival at Newcastle under Lyme over Whitsun. Family have never done a festival in the States so they are not able to compare between festivals this side of the Atlantic and that.
“We bad only been there once before and the nearest thing to a festival we’ve done over there was a free thing at the Carnegie Hall,” said Roger. “But I like to make the peace rallies there whenever I can. I went to one in Boston where there were 75,000 people on the common all preaching Black Power. It was really interesting.
“Over there they have got a load of different views on the whole situation. It’s frightening for people like us from Britain, but it is interesting because so much is happening.
“They seem to be afraid that their whole economy is in danger of collapsing. They have amazing ads on TV like ‘Spend your money wisely or America will collapse.’
“Their way of life bas got a lot of interesting things but I think you would have to live there for some time before you got into it properly. I’ve only been there twice and I’m still learning.”
He says that there is certainly a lot happening there as far as the music scene is concerned. “We saw Chicago at the Fillmore and they are a good band. I don’t think they swing as much as they could but it is very good. And the James Cotton Blues band! they were like hearing the blues for the first time.
“I suppose when you think of a real blues band you think of coloured guys from America. They played the blues but they really swung, they were incredible.

Burdon
“And we saw Eric Burdon and War which is a really nice band. He has got a Swedish harmonica player with him and coloured guys on piano, guitars, bass, drums. Oh, and a conga arummer. I think Eric has got what he’s been looking for for the past five or six years. It really works.”
Roger said they looked forward to the Roundhouse on Saturday but just intended to get on stage and have a blow-“because it was such a relief to get back.” He didn’t think America had changed the band much.
“The band has been changing since Polly joined, although that was five or six months ago. A band has really got to be together for eight or nine months before you feel it clicking. I suppose America speeded us up a bit. You see, we’ve been playing in England for three years and, wrong though it is, you tend to get a bit blase about the audiences. But it was different in America because they didn’t know us. So it did the band good and we’ve still got that attitude.”
Family have a Scottish tour lined up and an English concert tour, plus a tour of Germany, and one nighters in Paris and Amsterdam. And there is also a festival in Germany.
They also go into the studios soon to put down a few things, although there are no plans yet for a new album. There might be one at the end of the year.
“We write things and record them, or else they just pile up. We are going back to the States in August. But it won’t be for longer than two months. I think if we were over there for longer than eight weeks we’d all flip out.”