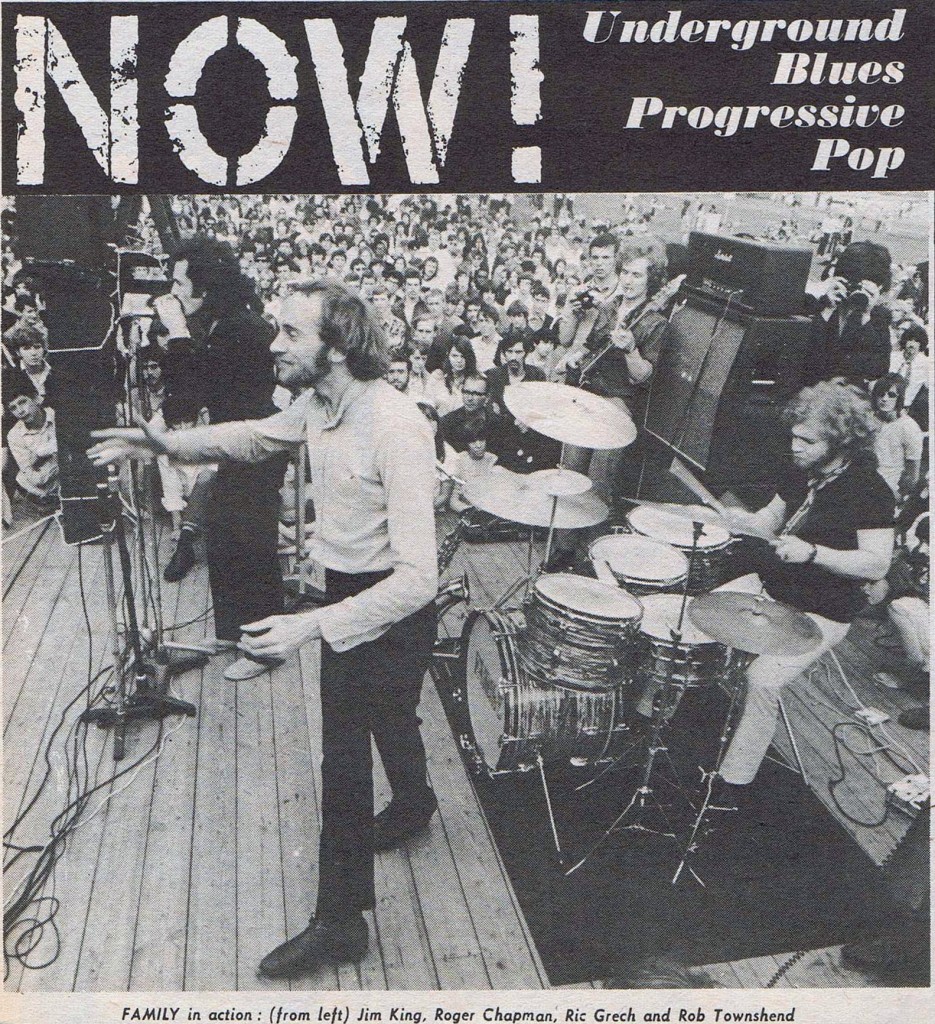 ON THE EVE of their first (and doubtless triumphant) trip to the States the Family find themselves in the somewhat peculiar position of being one of our very best groups with a huge following without ever having had a record in the charts, without ever having appeared on a major TV show and with the barest minimum of publicity.

“Family are known in America to,” said a happy and very together Ric Grech, the Family’s bassist and virtuoso violinist, last week. “But purely by word of mouth – people who’ve come over here and seen us go back and talk about us.

“But that’s been the whole thing with the Family from the very beginning. And it hasn’t stopped happening yet.”

The power that word of mouth recommendations have, though, is proved by the incredible fast sales for the group’s second album, “Family Entertainment,” which came out to the tune of 12,000 advance orders.

“The album has opened up a whole new thing for us. With the last album, all the young people who came to hear us and liked us bought it. But with this one we’ve had parents and old people ringing up to say how much they like it – apparently they think it’s got lots of nice melodies and it’s not too freaky.”

But already, such being the constant progress Family insist on, Ric is looking forward to doing the next album, which is to be recored live at San Francisco’s famous Fillmore ballroom.

“We did the album last November – it took us about a month to record. But there’s always hang-ups, with the sleeve or something, with our albums, which means by the time we hear them we’re always playing the stuff on them very differently.”

Family were due to leave for the States before Christmas, but found so many things were happening for them here they decided to put the trip back.”

Which was, on looking back, quite a wise move. “We could have gone to the States a year ago and probably made it as another English group. But now I think we’re together enough to make it on a purely musical level.”

With such an impressive line-up of musical talent, Family – Jim King (sax and harmonica), guitarist John Whitney and drummer Rob Townshend [sic] – can hardly fail, like so many others of our best groups, to achieve full musical and financial recognition once they finally hit the States.

Ric, for one, is optimistic about their chances. The Americans are so extreme in everything they do that they’re just going to flip when they see Roger onstage because he’s so violent.

“All I know is that we’ve got to do just what we feel like doing. If Roger feels like smashing a mike stand then he’s just got to do it.”

Because they are so highly respected by just about everyone except the record buying public as a whole – the people who buy Engelbert and “Albatross” and vintage Tamla-Motown records – Family soon gained and haven’t yet lost the tag of being a “group’s group.”

“But what’s that mean?” asks Ric. “It’s just a matter of people digging each other. For instance I dig the Nice very much, and I used to like Traffic a lot – surely Traffic was a real group’s group.”

His support for the Nice is proved by the Nice’s recent alltime-rave concert at London’s Institute of Contemporary Arts, when Ric turned up with his violin (an instrument he’s been playing since he was ten) and joined the Nice onstage with people like John Mayer, who plays incredible Indian music, plus assorted other musicians – both from jazz and pop.

The result wasn’t pop by any means, but nor was it classical or jazz or any other classification. It led to, Ric is convinced, a new art form which much eventually grow out of pop.

“The ICA was a brilliant idea but it’s on such a small scale. I think in the future things must come together more, though, and eventually it will be just that – a new art form.

“The trouble is if you go anywhere in the country you get jeered at as a long-haired idiot – they think playing in a rock band is all you’re good for.”