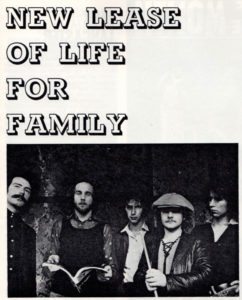 “It’s hard to say whether Family have been going for two years or four months,” says Roger Chapman, the group’s lead singer. Family faced something of a mini-crisis when bassist Ric Grech left to join Blind Faith, for they were just starting a tour of the United States when Ric broke the news, but they quickly found a fine replacement in John Weider, and have gone on from there renewed and refreshed.
“Ric split after we’d been in the States for two weeks. We were very confused and bung up with this happening at the beginning of a tour. But Peter Grant, who was handling us in the States, knew John, who was doing session work on the West Coast and asked him if he’d like to join us. John listened to our albums and came over from L.A. to Detroit to hear us play our last gig with Ric. He liked the band, and we had a blow afterwards which was too much.

“John is very happy because he says he’s never been in a band where he’s been part of a communal thing,” Roger added. John, who was playing guitar for Eric Burdon until the Animals split, features his guitar and violin with Family as well as playing bass.

“We’re working in a new environment having a different person in the group,” said Roger, “and we’ve become a lot more aware of ourselves. We lost a bit of security with Ric leaving, but we are now into a lot more things, and although I say it myself we’ve never been better.”

And English audiences seem to agree with that verdict. Family received a really massive ovation at the Plumpton Jazz and Blues Fe tival this year, and did a thirty minute encore at this very important venue. “They were a demanding audience,”
Roger told me, “and I don’t blame them because they paid the bread, but when they dug something they really showed it. The organisers said it was the best reception any group had received in ten years of festivals.”

A lot of people now feel that Family have really arrived as one of the country’s true top-line groups-they are certainly very much in demand and attracting huge audiences- but Roger is reluctant to agree with this. “We’ve no fixed direction. Once you set yourself a standard and work towards it and finally reach it, where do you go from there? If your ambition is to go on and on it’s much nicer.”

And Family will no doubt go on for a long while. “We’re not built up on any phoney scenes,” explained Roger. ” People know us from gigs and we’ve won our fans from gigging. We’ve done all the bard working and bad gigs.” And this is true enough. The group has built its reputation
this way as have most other top underground groups like Jethro Tull, Chicken Shack and Fairport Convention, who have now broken into the singles charts. Family, however, are not concerned to make a mark on the singles market. “We’d like to have a hit single, but we don’t aim at making singles,” said Roger. “We go into the studio and just record tracks to the best of our ability. If a track turns out to have a lot of appeal as well  as being groovy we might release it as a single, but that’s all.”

At the present time, Family are doing just this, working in Olympic studios setting down tracks towards their third album. They are recording everything they fancy doing, so that the end result is natural, the performance pontaneous with things happening as they work on a number. They feel they are more in control of their music than ever before and so spontaneity that was not there at all in their first arranged album Doll’s House and which was developing in Family Entertainment can be given full rein. “Doll’s House was our first work in a studio, and we had to get down to work. We were nervous and needed someone to show us the way. We relied on Dave Mason to guide us, perhaps a bit too much. We were going to produce Family Entertainment ourselves. We recorded so much and wanted to do more, which we planned to do to get the best possible album. We went up orth working for about four days and when we came back we found everything had been mixed and put together as Family Entertainment. A lot of things that should have been in were left out, so this time we have a completely free hand. “Doll’s House was very clean, everything in place with no ups and downs. The new one is just songs we’ve written and are recording, and I can’t say how we’re developing. We’re just doing naturally what we think is good.”

In order to make sure the album is as good as possible, a projected tour of the States for this month has been postponed to January although the group will be going to Europe for a while. They have done television on the Continent, and have something of a reputation in clubs in Paris, Amsterdam and elsewhere in much the same way as the reputation of groups like the Doors, Jefferson Airplane and Buffalo Springfield spread by word of mouth in Britain before they were generally known or had sold many records here.

Roger is hopeful of a good reception in Europe: “When we played the Marquee recently there were a lot of foreigners in the audience and some of them came up afterwards to say how much they liked it. That was really nice, and it makes you want to go over to where they live.”