Saturday night in Philadelphia and down at the local radio station something stirs… what’s this? Roger Chapman reading the weather report, Rob Townsend doing the news, the Coasters “Yakkity Yak” at full volume… mid-America taken by surprise.

Family have never had it so good. Their first real American tour for three years and the world’s exploded around their ears. It’s not surprising that they’ve been taken by surprise.

They went out thinking they were nonentities ten days ago. This week, after only eight gigs, audiences are reacting with fanatical power. And meanwhile, with “Bandstand” not even released there yet, it’s the second most played album on FM radio, the fourth of the most popular import albums into the country. 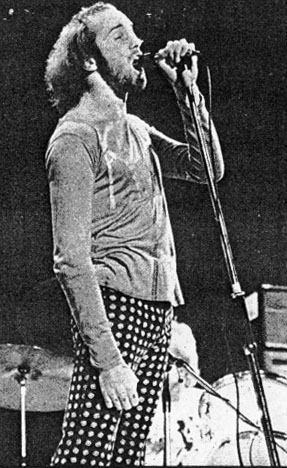 So that despite Roger Chapman’s lay-off with laryngitis for two concerts, it’s not surprising that it was a very elated Rob Townsend who called from Toronto on Thursday – 24 hours before the concert at the 20,000 capacity Maple Leaf Gardens.

“This tour’s really wiped out all the memories of the first one we did here four years ago – it really has been the greatest thing for us. Especially since that bad thing at the Fillmore when Ric Grech left. I think mainly it’s because being with Elton John, the kids who are coming to the concerts don’t remember that far back. As far as they’re concerned this is our first US tour.

“We weren’t worried about coming out here without anyone really knowing much about us. In a way it’s the best way to be because you’ve got no responsibilities, but none of us ever thought we’d be getting the kind of response we’ve had, it’s really knocked us all sideways.”

Boston, it transpires, two days in after New York, has been the high-spot so far. Indeed the reporter for the local paper got totally carried away by Family’s appearance on the bill and could hardly contain himself in print:

“We did two concerts there. We were only supposed to do 40 minutes on stage, but the audience were on their feet and wanted us back on. I’ve never seen the band so uncertain what to do. We just stood off backstage listening to it all without budging and with Elton pushing us, trying to get us back on stage.

“He’s really been amazing to us through all the concerts, we couldn’t have had a better person to tour with. Anyway in the end we said no, 40 minutes was what we had and that’s all we’d do so Elton stopped in the middle of his set and gave us a great plug for `Bandstand’ and then brought round champagne after he’d come off.

“With the audiences and Elton’s incredible encouragement it’s been a tour that’s given us more than we could have ever hoped for. Today’s really been the first time any of us have stopped long enough to realise just what’s hit us. On the first date in New York, audiences weren’t just requesting tracks from `Bandstand’ – which was strange in itself because we didn’t think anyone would have heard them – we were getting calls for older tracks.”

In fact, the band are including some of the numbers from “Fearless” on stage – an album which got them a lot of air play in the States back in 1970 [sic]. But the majority of the material – naturally – is “Bandstand” stuff like “Top of the Hill”, “Burlesque” and “Here Comes the Sun” [sic]. And they change the order every night – knocking that through 49 cities something could easily give and it’s not going to be their music.

So there we are. At last it looks like Family’s year – a peak they’ve been searching for for over seven years of hard nose-to-the-grindstone slog. The accolades that have been due to them finally coming through both from here and now America…

“I mean they apparently even dig us in Memphis and Dallas!”