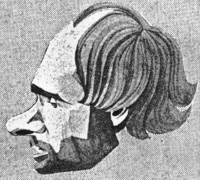 (Melody Maker, September 27, 1969)
COUNTRY JOE AND THE FISH: “Here I Go Again” (Vanguard)
What’s this? It really reminds me of someone. It has a very American sound but nowadays lots of English groups have that sound. In fact they could be English. Whoever it is they’re not doing much for me. The vocalist sounds a bit like Tim Buckley. Who is it? Well they were doing some interesting things about a year ago. But this is really weird.

GRIFFIN: “I am the Noise in Your Head” (Bell)
This really doesn’t get to me. Oh, what! Give that one a miss. The guitar sounds like a bit of Luther Grosvenor of Spooky. It sounds like a demo disc. Who is it? Well, that’s a drag because I know the singer, Graham Bell. I don’t think this makes it, which is a shame for Graham.

LEVITY LANCERS: “Oh Play That Thing” (Mercury)
Mary Hopkin? No – the New Vaudeville Band. I really don’t like this at all. I can never understand what these people are trying to get into. Ever since that Vaudeville scene there have been session men trying to get a hit with that sound, and the Bonzos are the only ones who can do it. Give it a blank.

JIMMY YOUNG: “You, No One But You” (Polydor)
Oh turn it up – what? Ha ha! Who CAN it be? Is it the Golden Shot – Bob Monkhouse? I bet I know who it is – Des O’Connor! No – its Jimmy – Jimmy what’sis-name, the disc jockey. It really is terrible. I keep expecting him to give a recipe for stewed rice at any minute.

DELIGHTS ORCHESTRA: “Do Your Thing” (Atco)
Is it the NDO trying to be groovy? Bands who try to play what they think is commercial pop never make it because that’s the way they think about it. This is a good old sequence. Yes, I think I have heard this tune before.

DON PARTRIDGE : “Going to Germany” (Columbia)
You’ve really got some wonky singles here, you really have. Can we leave this one? Who is it? Well that’s funny because I really liked “Blue Eyes” and “Rosie”. They were very honest and simple.

RASCALS: “Carry Me Back” (Atlantic)
Ah, is it Otis? This is something like Lee Dorsey would do but not as good. It’s a bit ordinary. Is it called “Carry Me Back”? It should be. Who is it? Really? They’re trying to get in a soul bag. They started out doing some incredible things like “Groovy.” This sounds as if they are trying to make a 1963 coloured vocal group record, and I’m afraid it doesn’t make it.

ESTHER OFARIM: “Saturday Night at the World” (Philips)
Oh Philips – that looks promising. Ha ha! I haven’t got a clue who this is. So many of these chicks sound the same these days. I dig Mary Hopkin, but I just don’t know who this is. The Caravelles? Let me think – oh, Esther Ofarim. She’s got a great voice. She reminds me of Barbra Streisand, but I don’t dig this at all.

DOORS: “The Soft Parade” from the LP The Soft Parade (Elektra)
Jim Doors and the Morrisons. I really like his lyrics. Yeah, he’s very strong this fellow. I don’t dig him on stage but he comes across well on record. This sounds a bit like the Mothers. There used to be an aura about their total sound, but I don’t know if I dig what they are doing now. Their singles aren’t what Doors are about. I like their old albums a lot better.

BEATLES: “Come Together”, “Something”, “Maxwell’s Silver Hammer”, “Oh! Darling”, “Octopus’s Garden”, “I Want You/She’s So Heavy”, from the LP Abbey Road (Apple)
I don’t know – the Beatles are doing a Humble Pie now. This sounds very moody for the Beatles. And I’ve heard this tune “Something” before somewhere. In the past the Beatles have been able to borrow things and put themselves into it. This is a bit too obvious though. And “Maxwell” doesn’t make it for me. This is really a drag because I really dig the Beatles. This is an inferior version of “When I’m 64”. Shall we try another track? “Oh Darling” doesn’t make it at all. They’d better turn up with something good soon. “Octopus’s Garden”? It’s Ringo. Ha ha! Now if any other group did this, it would be a complete washout. No, I can’t get into this at all. Let’s hear the next one, yeah? I know this one – it’s like Mel Torme’s hit “Coming Home”! Ever since their last LP they have been making records as if it is something they have to do because they are the Beatles. Maybe the whole thing has got beyond them. If this album had been by anybody else it would have been a complete washout. The Beatles have been a major influence on the whole music scene, but I don’t see them being an influence anymore.