Latest and greatest – that’s the Family’s new album! Gavin Petrie heard an advance copy in the company of Roger Chapman and Rob Townsend – and recorded their comments.

“ANYWAY” is FAMILY’s latest and probably greatest album-giving a complete picture of the band, one half recorded live at Croydon’s Fairfield Hall and the other in the studio. The album to be selected on Nov 13, also has a revolutionary cover: Apart from the inside dust cover there’s a folding inside cover with a drawing by Leonardo da Vinci of his plans for “mortars with explosive projectiles,” which Roger Chapman says has “no significance” but was merely seen and liked by the band.

Roger Chapman and drummer Rob Townsend talked to me about the album. 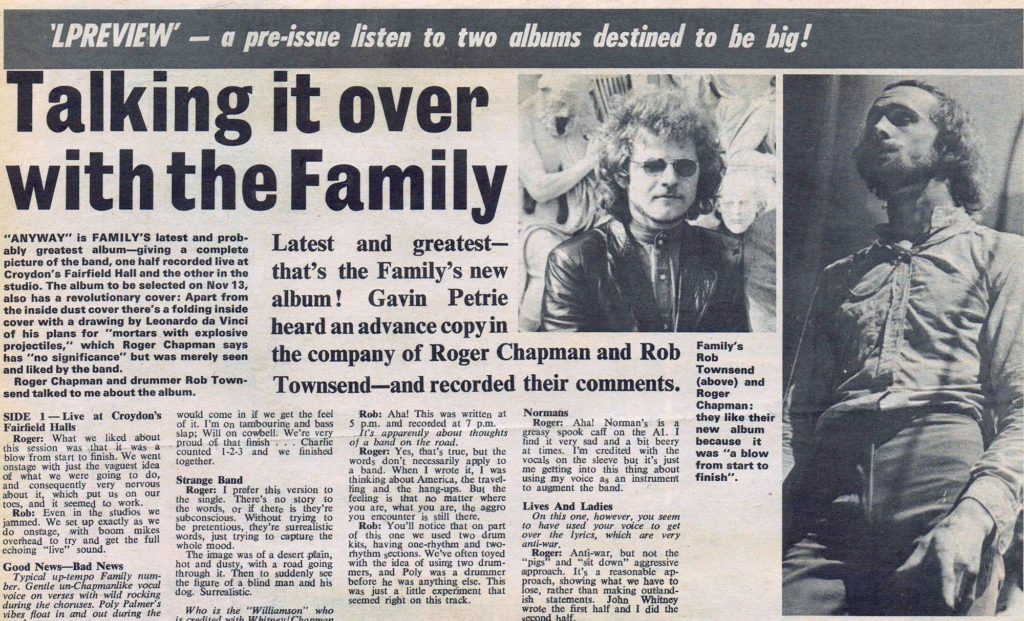 SIDE 1 -Live at Croydon’s Fairfield Halls

Roger: What we liked about this session was that it was a blow ‘from start to finish. We went onstage with just the vaguest idea if what we were going to do, and consequently very nervous about it, which put us on our toes, and it seemed to work.

Rob: Even in the studios we jammed. We set up exactly as we do on stage, with boom mikes overhead to try and get the full echoing ”’live” sound.

Good News-Bad News
Typical up-tempo Family number. Gentle un-Chapmanlike vocal voice on verses with wild rocking during the choruses. Poly Palmer’s vibes float in and out during the number.

Rob: We tried to record this month’s before, but it didn’t work so this tine we just went on with no planning and jammed it. We think it was successful.

Roger: This was to give Poly a chance to use the grand piano at Fairfield Halls; it’s such a great sound. We had a vague arrangement but just let Poly get into the piano then followed him.

Holding the Compass
Rob: This was a busker job. Listen! Even Roger admits it on the album. Only Roger and John knew the song and we said we would come in if we get the feel of it. I’m on tambourine and bass slap; Will on cowbell. We’re very proud of that finish. Charlie counted 1-2-3 and we finished together.

Strange Band
Roger: I prefer this version to the srngle. There’s no story to the words, or if there is they’re subconscious. Without trying to be pretentious, they’re sur-realistic words, just trying to cwpture the whole mood.
The image was of a desert plain, hot and dusty, with a road going through it. Then to suddenly see the figure of a blind man and his dog. Surrealistic.

Who is the “Williamson” who is credited with Whitney/Chapman on the songwriting?
Rob: That’s a friend of Rog’s whom he visits when we go home to Leicester. He’s the salesman in the lyric of “Lives and Ladies.”
Roger: I was with Williamson in his front room having a bit of a mini-jam when we came up with this idea. When I brought it back to Whitney as a song suggestion he thought that it was only because I couldn’t play the guitar that I cou1d possibly have written it. He says only sameone who didn’t know chords could have conceived it.
Rob: Yes. A simlilar thing happened when we listened to “No Mule’s Fool.” After it was recorded we found that a chord was wrong. The violin should not have been able to play it on top of the guitar, but it sounded okay, so why worry?

It’s apparently about thoughts of a band on the road.

Roger: Yes, that’s true, but the words don’t necessarily apply to a band. When I wrote it, I was thinking albout America, the travelling and the hangups. But the feeling is tlmt no matter where you are, what you are, the aggro you encounter is still there.
Rob: You’ll notice that on part of this one we used two drum kits, having one-rhythm and two rhythm sections. We’ve often toyed with the idea df using two drummers, and Poly was a drummer before he was anything else. This was just a little experiment that seemed right on this track.

Anyway
The notes I made on this one while listening read: “Melodic, with the effect of open spaces.” Am I right?
Roger: Well, it was written at the Forth Bridges Motel in Scotland, overlooking the Firth of Forth. Looking over the water gave me the feel of the words.
Rob: We did another version of this at Croydon during the live recording, but we didn’t like it. And we did have a big production of it in the studios, but we didn’t like that either. So in the studios we put down one good take and then built round it. But it was over-produced. So we got back to the very basic and simple production and it worked. We incorporated some African drums on this. They’re set up something like vibes, with the tubes covered in vellum, and other percussion is simply playing on the block of the studio piano.

Normans
Roger: Aha! Norman’s is a greasy spook caff on the Al. I find it very sad and a bit beery at times. I’m credited with the vocals on the sleeve but it’s just me getting into this thing about using my voice as an instrument to augment the band.

Lives And Ladies
On this one, however, you seem to have used your voice to gel over the lyrics, which are very anti-war.
Roger: Anti-war, but not the “pigs” and “sit down” aggressive approach. It’s a reasonable approach, showing what we have to lose, rather than making outlandish statements. John Whitney wrote the first half and I did the second half.