“I don’t think people knew quite what was going to happen when we went on stage.”

Jim Cregan is sitting in the back of a Range Rover driver by a WEA artist liason man, his arms around his girlfriend Linda Lewis. He’s checking out if there’s a bottle in the back and thinking over the first Family gig at Oxford on their current British tour. We’re on the way back to London and Jim’s happy, extremely happy.

It had been a fun night at the New Theatre, Oxford – a far cry from the Family I had seen some months before at the Roundhouse in London when they looked to be on their last legs.

It was a shame to have to give a bad review to a band that I had enjoyed for so long, but it really looked that night like Family had had it. It was hard to imagine the music ever getting back to its early strength.

But Family have done just that. A long tour of America with Elton John has pulled them right back into giving them the goods. Personnel changes have improved the music and stage act so that now they are once again as exciting and thrilling as they were when “Weaver’s Answer” and “Family Entertainment” were fresh and new.

The final move in the changes came in America. With Jim Cregan taking over bass from John Wetton who had left to join King Crimson, Family had a solid rhythm section driven along by Rob Townsend’s compact and precise drumming. But Poli Palmer was beginning to drift away from the music they were beginning to formulate.

Poli’s vibes, keyboards and Moog playing, though always technically perfect, was getting more and more abstract, moving away from the simplicity that Roger Chapman and Charlie Whitney are beginning to find in their music. It came to a crunch halfway through the tour, and they decided that when it was over the best thing was a parting of ways. 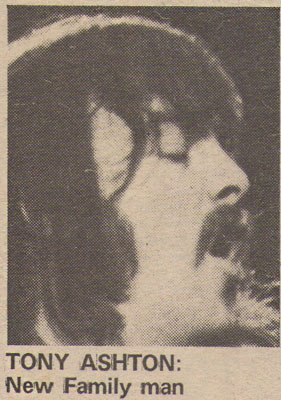 Poli had originality and flair in his playing. But compared to Tony Ashton who has joined for the tour and possibly full time, his music was detached from what Family were trying to get into.

To watch Family on stage at the New Theatre was a joy. They were trememdous. Musically, they were falling apart at the seams on numerous occasions with only Rob Townsend and Jim Cregan keeping it together. But it really didn’t matter.

The music, including all the mistakes in the playing, had a power that was exciting and as a stage act Family never looked so impressive. They were at home together playing, looning, laughing and getting across to people. It was fun and exciting without losing too much of the intensity that is so important to songs like “Holding The Compass.”

Off stage, they were looning too, Tony Ashton was well at home in the band after only eight hours rehearsing.

“Tony’s a wild boy.” says Jim. “I think in the past people have thought he was a good lunatic and that he’s like Zoot Money. But Tony’s really a good player.

“I’d like to feel that as a songwriter and singer he’d be able to join Family and do his own number outside the band as well. I don’t know yet…it’s not that clearcut. Perhaps he’ll just do the tour and split.”

In his dressing room Charlie Whitey is having conversations with Jack Daniels, putting back the Kentucky whiskey with a vengeance and getting loose. Shouts and screams come from the room as he and two ladies loon and go crazy with laughter.

In another room, Rob Townsend sits with his wife Carol and baby son talking about the changes Family are going through.

“The way we’re progressing is towards simplicity. The way Roger and Charlie are writing they’re not aiming for that simple feel but that’s the way they’re going.”

“Like ‘Burlesque.’ A couple of years ago you wouldn’t have done a song where the rhythm was the same almost all the way through…a Stones type of thing. We just did it and there was no paranoia about it sounding a bit commercial.

“John Wetton was a great bass player and we all really got on well together, but the rhythm section never got together.

“With Jim it’s different. He’d never played a bass before when we asked him to join, he thought we were all mad. What usually happens with guitarists turning bass players is they get very fast, but with Jim it’s just the opposite, it’s great because he plays very simple.”

On stage downstairs Linda Lewis was well into her shortish set. She got through to the crowd with her charm and her songs. But Linda didn’t stand a chance against Family. They opened with a take-off of “The Virginian” and went straight into “Barfly.” They were away and setting the mood for their set.

It didn’t become apparent at first, but this was to be a looning night. Without time to get their set fully organised and rehearsed the only thing open for them was to take it easy and have a ball. It could have been disastrous, but it got right through in the same manner as The Faces.

Roger Chapman has begun to find a new groove, too. As a performer he has lost the intensity that often spoiled his singing. As Linda Lewis puts it, he’s less paranoid.

Roger has often had trouble in getting through to people without having to be extremely heavy. If Sunday was anything to go by he has lost that now and can work without having to lob mike stands into the audience to get across.

“Burlesque” follows “Holding The Compass” with Tony Ashton putting in amazing high parts on the electric piano above the two guitar riff that soars and sharpens and has more guts than the hit single. Family are working out fine with the changes, and after finishing with “Weaver’s Answer,” the biggest surprise of the evening is delivered.

Family are rock and rolling to “Rocking Pneumonia and the Boogie Woogie Flu,” with Linda Lewis helping out on vocals and Tony Ashton playing boogie piano. It was a great version, Linda getting some lead vocals courtesy of Roger, and the scarecrow himself loving every minute of being able to boogie in front of an audience that lapped them up.

By the time they reach London, Family are going to be one of the looniest fun bands playing today.