TO CALL the Family unusual is about an adequate a description as calling the Atlantic Ocean wet; but they are and it is. For many, many months pop’s legendary in-world have been talking about this group from Leicester with all the fanticism of a new religion-and seeing them perform onstage you’re left in no doubt as to why.

Already their fans must number in the many thousands. and their first album, “Music In A Doll’s House,” should soon double or triple the figure. Good? It’s astounding, and bursting at the seams with a wealth of new and original musical ideas.

But their breakthrough into kingsized fame will also be due, if and when it comes, to their extraordinary manager John Gilbert, associate producer of one of the pop world’s all-time favourite films, “Alfie.”

They paid for their album entirely on their own (cost: about £3,500). got Traffic’s Dave Mason to produce if, wrote all the songs, recorded them–and sat back and waited.

They didn’t have to wait long. Manager John was offered a £170,000 contract by America’s Reprise records–a contract which Mamas and Papas manager Lou Adler said was the best he’d ever seen for a new group. 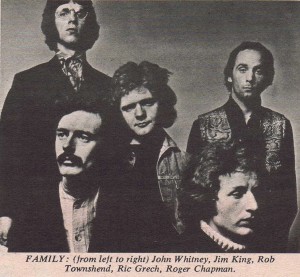 Lead singer Roger Chapman, tall, lean and. bearded, said: “People come up and tell us it’s a nice album but we can’t get very enthusiastic about it. After all we finished it back in April, so it’s old hat to us now. We’re going into the studio next week to start recording another one.”

Yes – but the rest of us poor mortals are still digging “Doll’s House,” which is remarkable not only for the group’s distinctive sound, with emphasis on violin, saxes, cello and sitar, but because it has been conceived as a unified whole, with various themes running throughout the album-and even “God Save The Queen” to finish it.

“But that’s the way albums are going anyway – more or less worked out to a script, like a film. Like the Tiny Tim album. for instance, which is really incredible.”

The Family are drummer Rob Townshend, aged 21 and from Leicester: guitarist (first in the country to play a twin-necked version) John Whitney, 24, from Yorkshire: bassist Ric Grech, who’s also an expert violinist, guitarist and cellist, 22 and born in Bordeaux: multi-instrumentalist Jim King (mainly to be seen playing soprano and tenor sax and harmonica on stage), who’s 23 and comes from Kettering, Northants, and singer Roger, who courageously owns up to being 26 and also comes from Leicester.