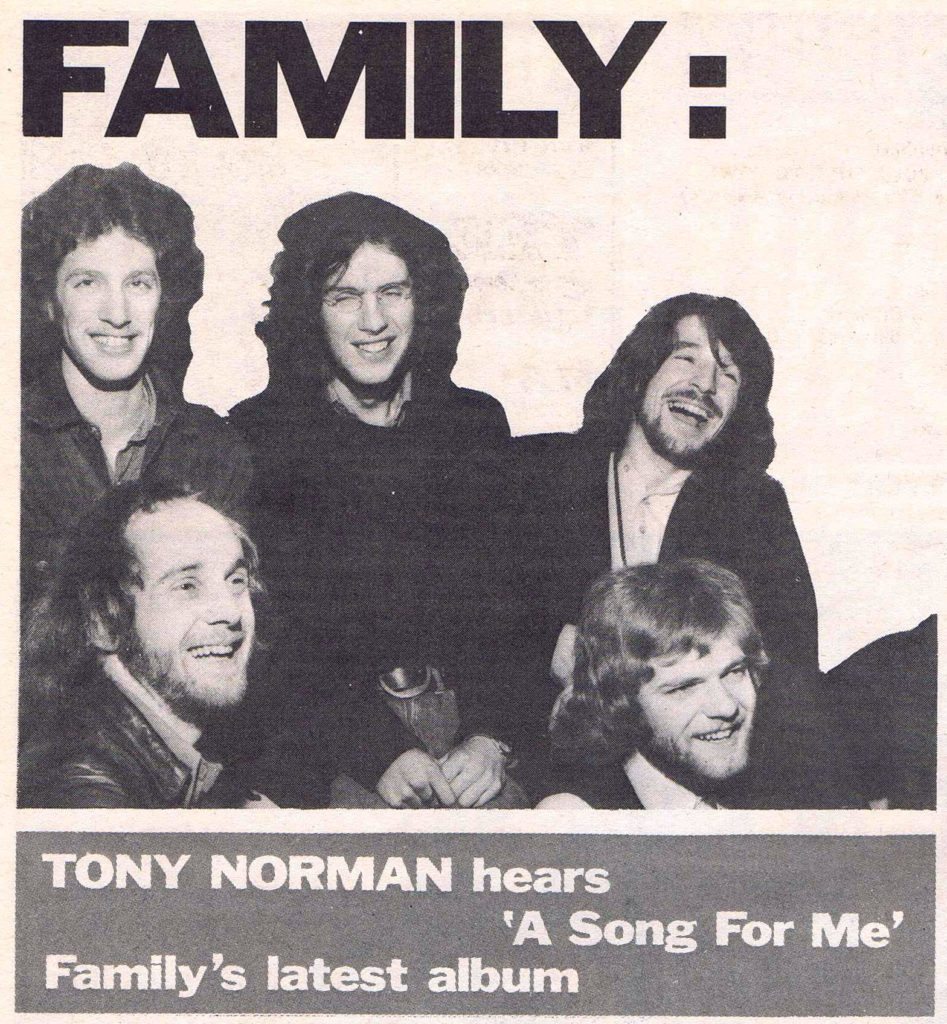 Some weeks before Christmas I sat in on a Family recording session at the Olympic studios just south of the river. At that time new man John ‘Polly’ Palmer was dubbing on vibes to a track that had already been recorded. Jim King had left while Famly were working on the new album “A Song For Me”.

Family’s third album was not completed without hangups. Palmer dropped into the band nicely, but his musical influences not strongly felt. He came in too late to contribute to the composition etc. This is a differenlt Family from that heard on “Dolls’ House” and “Entertainment.”
album

I went down to Roger Chapman’s fiat last week to talk to him about the album. I asked him to tell me something about each track. We’ll go through “A Song For Me” track by track. I’ll briefly give my impressions, then Roger’s comments will be in quotes.

Chapman: “I wrote the lyric and John Whitney the chords. We used fuzz flutes where it builds. We did’ this in a 16-track studio. I like the sound we got, it’s like the instruments are stuck together. I think we have got a lot of shading on this one – we used the dimension of the thing. It’s very tight and it’s good to have numbers like that, good to do on stage.”

“Some Poor Soul”: A much cooler atmosphere. Groove smoothly along with nice rich acoustic guitar chords and flute. Chapman’s vocal is less forced. The band get a nice dreamy
thing going.

chord sequence
Chapman: “Again John Whitney and I wrote this. John gets these gems of chord sequeDCes and we add some lyrics to them and come out with a song. We finished this off in the States. The lyrics just wouldn’t come, then it happened in New York. It’s simple in that it’s only four
instruments, two guitars, flute and drums and me, but as a song it is probably the most complicated. We did that one live in the studio.”

“Love Is A Sleeper”: Again the tempo rises and this is a pretty heavy thing. There is a ‘Strong riff running through most of the thing. ‘Doesn’t knock me out really, but I like the vibes that float over the whole thing.

Chapman: ”The melody and basic tune are mine and John got the whole thing together. Zoot Money plays organ on this track. He came down one nighlt and sat in. It ended up as a nice blow – I think it is very together.”

“Stop For The Traffic:” This is a medium paced thing that moves pleasantly. This is what I would can country/pop. Some nice chunky chords. Lyrics are good.

Chapman: “A lot of my lyrics are basically personal -I could try and explain all of them but I would only get confused. The best thing is for you to listen and see what you make of them. This one was written in New York, about New York – my impressions of the city. It has nothing to offer as far as technicallties go. To me it just has a nice feel-It’s just a nice little song.”

“Wheels”: The song they have featured on stage many times. This is a good track, some beautiful flute work.

Chapman: “I wrote this with Rick Grech and John Whitney tidied it up, pulled it together, The lyrics tell what is basically my philosophy. I think it builds well. That’s about all on that one.”

SIDE TWO:
‘Song For Sinking Lovers’: Distinct country feel to this with banjo plunking away and violin very much in context. The melody is good and the rhythm is very tight. Nice one.

Chapman: “This is probably our favourite track. We very much want to do this in our live shows. We are going to buy an electric banjo when we get to the States and then it will be part of the show. The banjo is important. Yeah, I like this one-it’s the one where we all just smile at each other when we hear it. It’s about a chick, I wrote it with John Whitney.”

“Hey-Let It Rock:” Very cool jazzy vibes jumping all over this one, nice flute drifting through. ‘Polly’ Palmer really shines through on this one. Very short, but very good – should have been longer.
dissatisfaction.

Chapman: “I usually write through dissatisfaction – usually shouting the odds about something! This one must have caught me in a good mood. This was just more or less a blow. The lyrics are a bit of a parody because it doesn’t rock at all. It’s a good number for Polly.”

“The Cat And The Rat:” Sounds like they are having one almighty punch-up, that cat and rat. This one leaps down your throat. If you like rock, you’ll like this.

Chapman: ”This is quite a heavy one. It’s about the hypers, maybe in this business, the guys who never give you a chance, They sell people like they would sell a tin of peas. It’s a very grey business-l’m having a shout at them. To me this is a rock and roll track-it sounds like a seven-piece band really steaming. I like this track.” 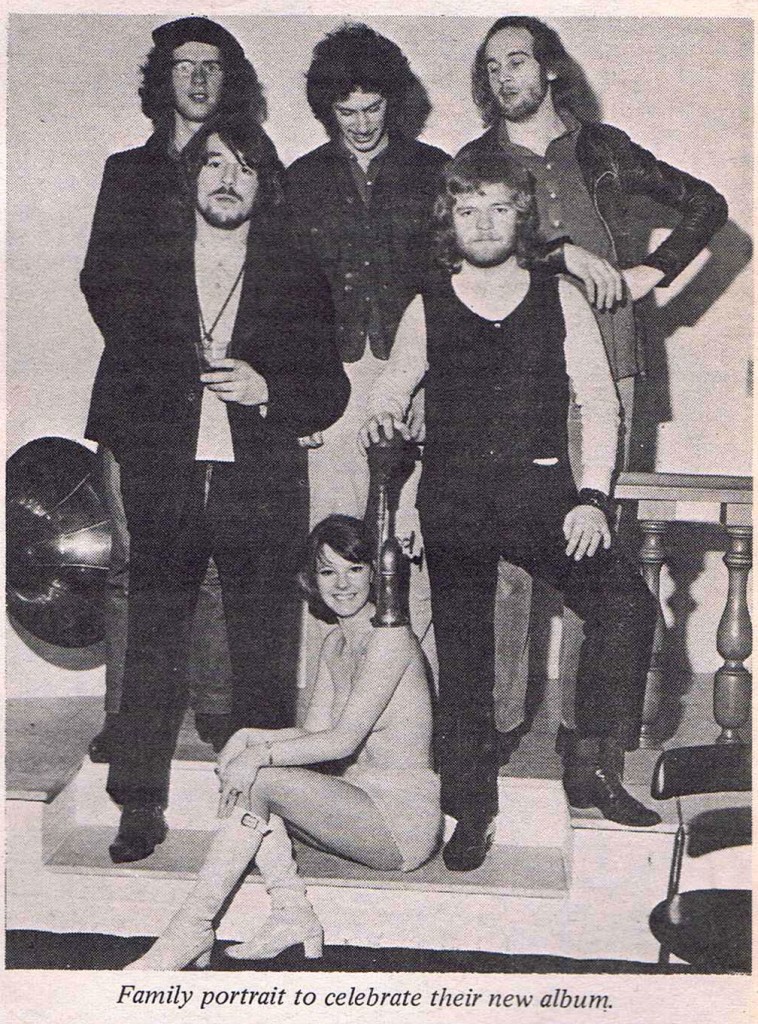 instrumental
“93’s O.K. J”: This is an instrumental. It sounds like two acoustic guitars in the intro. They are played in a Bach-like classical mood. The thing builds and some steady runs are heard from Rob Townsend’s drums. Good, impressive track.

Chapman: “This was written by John Whitney and John Weider. Let me explain the title – 93 was the number of the house they both lived in, O.K. were the initials of the street and J stands for John. On this one they are really grooving together. They dig playing together and they are close friends. Yeah, this is a good one.”

“A Song For Me:” The title track and a good hard blow. This has guts and punch and provides a good climax, to a very worthwhile album.

recorded
Chapman: “This was just a live blow in the studio, the only thing we added was the violin. We really tried to get that live feel across on this. We recorded at the beginning of every session, just to get warmed up. In the end we chose the best of all the takes. The lyric is probably shouting the odds again!”

Finally I asked Roger for his impressions of the album as an entity.

“Jim left us while we were working on this and when Polly joined we had to find our feet. The most obvious commercial thing to have done would have been to get a guy who had a moustache and played tenor sax. But, we wanted to try new things. All these songs were written before Polly came in, but he will contribute more in the future.

“I think this is the best album we have done so far. But we are already planning the next.”