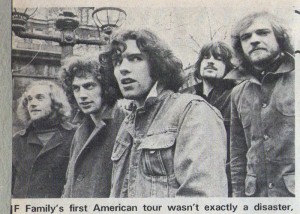 Singer Roger Chapman got laryngitis in Boston; had his passport stolen in New York so the band had to play Canadian dates without him; Rick Grech quit mid-tour to join Blind Faith; they had kit pinched; “little bread”; and promoter and management hassles en route.

To cap it all they got involved in a fracas with Bill Graham at New York’s Fillmore East in an incident that may cost them dear on their current, second U.S. trip.

I caught up with the bearded Roger in the hectic few days before the hand left for the States and waited in his flat in a large, respectable block near the Albert Hall for him to return from Leicester, his home town. He shares the nat with Jenny Fabian, authoress of “The Groupie,” and a young doctor who also holds his surgery there.

When he arrived we drove around West London Underground stations looking for a photograph booth where he could get a passport snap before returning to the flat to talk.

It’s a fact that many English bands roar across the Atlantic in their Boeings expecting an easy ride and easy pickings on the American rock circuit; and a fact too that many come a cropper.

“I thought maybe it was a question of the wrong attitude as our music was concerned,” ventured Roger. “We have always played our own songs and for months before we went everywhere we played people were saying ‘You are going to blow them out with your music in America.’ We had that for six months beforehand.

“So we thought ‘Well great,’ but we never got into a trip about it because we were never as sure as other people seemed to be. And when we got over there we didn’t take America by storm with our music.”

The tussle with Graham, celebrated owner of the Fillmores East and West, has already had unfortunate repercussions. The self-styled “Father of rock” had banned the group after their first show when Roger threw his mike stand in the air – as is his wont – and it landed three feet from Graham.

It took the pleadings of English musicians from the audience, Noel Redding and Mitch Mitchell among them, to persuade the affronted Graham to let Family on for the second show. “We didn’t dare move on stage,” recalls Roger bitterly. “It was a total…joke.”

Graham has refused to have them back at his Fillmores this time over, although they were hoping to win him round when they arrived. “He said he’d let us in if we changed our name,” said Roger questioningly. “It seems somebody played him our album and he liked it but he’s set on not having the group called Family back.

“Bill Graham can be as good as gold but he very much demands everything done his way. Anything else and he goes berserk. He is looked upon as a God and he…believes it

“That maybe did us a lot of harm among promoters because his word is like law out there. We had many backstage hassles.

“But we did get some nice reaction from audiences. We gained something from it. People com eup and say it was a disaster but I never took it that way.

“Anyway that’s a heavy subject; can’t we talk about something more cheerful?”

It would be a kind of cartoon view of things to picture Underground musicians losing sleep and having great battles with their consciences over whether they’re getting commercial. But the experiences of Family give some reality to it.

The group had had its current best selling album, following a single that got to the bring of making it but fell the wrong side, and the pressure was felt to be upon them to come up with a commercial single to consolidate the ground won.

Said Roger: “People were saying to us ‘You must get a single out,’ there was all this hassle. And we all fell into thinking that a single would have to be commercial. The pressure for a single becomes the commercial aspect.

“But we didn’t really want to get into it that much and we got very hung up about it… about whether we were becoming popular or going commercial. We were getting paranoic.

“We sat down together and though about it. Do we do a commercial thing? And we decided we could not work like that and would do something we liked and that was it.

“We came to the conclusion that we were being honest and were not trying to con anybody and that is how it will stay. I don’t think you can get commercial as long as you are honest about it.

“We just want to do what comes naturally; we thought…’em all and that was it.”

Roger played me an acetate of the song they’d chosen as the next single. A lengthy, delicate number with a dream-like quality called “Today,” it’s due for release next month.

“We picked it from four others. To me this is not a commercial record – it is just a nice song we like to play – and the others would perhaps have been more commercial but we didn’t like them as much as this one.”

Does that mean they’re not bothered about singles sales? “We are bothered,” answered Roger, “in the sense that we bother about any record we make. We obviously want them all to sell; it is just that we want to keep Family music as it is.

“We are trying to sell our own product honestly.”