WE’D BE DELIGHTED TO HIT THE CHARTS – SO SAY FAMILY!
and ‘No Mule’s Fool ‘ could do just that!

AND so another change takes place and Family – move on. Jim King has departed with his saxophone. He will be remembered by the many friends of Family. His solo on “The Weaver’s Answer”, a track featured on the “Family Entertainment” album and countless stage performances, showed the jazz feel he brought to the band.

But, like the rest of the band, Jim is a dedicated musician. He will now devote his time to studying and there will be no time to travel and play with the band he was such an integral part of. 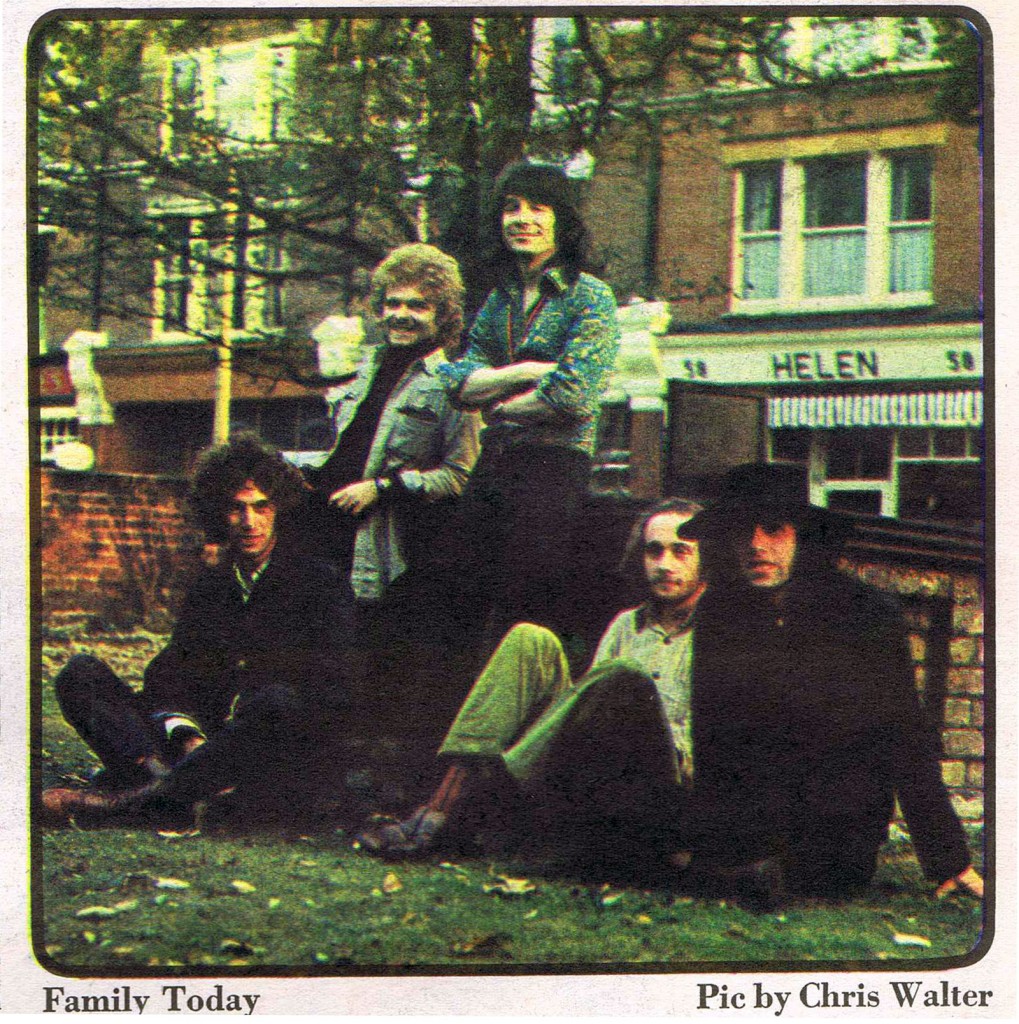 Jim’s departure means the end of an era.

A couple weeks back I saw the band at the Lyceum and felt that the wound left by Rik [sic] Grech’s departure to Blind Faith had compeltely healed. John Weider was no longer an outsider. The band were playing as a unit again.

Now they must start all over again, but a feeling of optimism and excitement runs through their camp. There is no time for disappointment and depression.

John “Polly” Palmer is the new member of Family. He was previously with Eclection and plays piano, flute and vibes. I met Polly and the rest of the group down in Barnes last week, where they were working on their next album, “Who’ll Sing A Song For Me.” John was adding his contributions to tracks which were recorded before he joined.

While the rest of the band listened intently to some of the completed tracks, I taked to Polly and drummer Rob Townsend. I asked Polly what appealed to him most about playing with Family.

“They’re a nice blowing band and I dig to blow,” he replied. “When I was playing with Eclection I had the same freedom I’m going to have with Family because I was playing virtually all the lead parts. But the thing was their arrangements were much more together – they didn’t blow as a band. Virtually, I was the only one who blew on a strict arrangement. Family blows as a band more, so you don’t really know what rhythm you’re going to go into in the next two minutes.”

Polly is a good musician, I don’t think many people will argue with that. He will enjoy his new working environment where you have got to be good to survive. His work on flute and vibes will widen the band’s scope and contribute a lot to the things they get into in the future.

Family want to spread outwards instead of pursuing one particular type of music.

“That’s why we try and use acoustic guitars,” explained Rob. “Too many bands go on and just blow solid – there’s no variation. The idea is that by getting into different things you can change the mood of the act. That’s why we thought of Polly, we knew he would fit in with this idea. We had to sit down and think of a replacement for Jim and the first name that everyone came up with was Polly.”

What did they expect him to do for the band?

“All we want Polly to do is just blow how he feels,” said Rob. “It’s the same with John Weider. We don’t really want a guy we have to tell what to play. John and Polly are already on the same scene as us. We don’t have to tell them how to play because the natural way they play is what we want anyway.

“In the next couple of months Polly won’t necessarily change the direction of the band. But gradually his own kind of feel will be felt. That will be progression, not a change of direction.”

Polly has written a lot of material in the past and although he hasn’t done mich lately, he hopes to get back into it.

Rob smiled and said: “I hope he does write for the band. Get yer finger out kid!”

They new album will be released in January. The group were not pleased with the first two album. This one is different, as Bob [sic] explained:

“If anything goes wrong with this one, we’ve ourselves to blame, because we’ve had a say in everything. We felt that other people messed up the other albums for us, but with this one Reprise just said it’s your album, do what you like. We’ve produced it, has a say in the sleeve design and we’ve had complete control of the studio, the mixing, playing and everything. We’ve used no session guys at all. With this album we are pleased that we can do every number on stage.

“We’ve really varied the material on the album. There are faintly jazz-influenced tracks with vibes and flutes and early Sixties-type rock tracks and there is an instrumental that goes through every stage. To get the live effect we did ‘Who’ll Sing A Song For Me’ which is the best example we’ve ever got on record of what we do on stage. We just played it every time we came into the studios and picked the best one.

“A lot of people were a bit disappointed by the other albums in that they were entirely different to the stage shows. When we went to the States they’d heard the albums, which were tame in a way, and then when they saw us on stage and saw the violent and hard playing that we got into, they were a bit confused. But, this album has got the lot. It’s the nearest to our live sound we can get. I think that’s why it will click. It’s just straight Family.”

Family’s single, “No Mule’s Fool,” is in with a chance of entering the Top Thirty – Roger Chapman on “Top of the Pops,” the mind boggles! – and they are very happy about it. Unlike many heavy bands, they would be delighted to get into the charts. They have no time for musical snobbery. I asked Rob to explain the group’s view on the single market.

“The thing is we’ve never done a single with the idea this is going to be a hit record, let’s put it out. All we’ve ever done is go into the studio to cut an album and recorded about 16 tracks and then selected the ones we wanted to put out. With this single everybody was knocked out with the melody line and we really liked it, so we put it out. Some people have said that we are going commercial and that it’s not like Family. Well, how more Family can we get? It’s got the violin, it was written by us, played by us.”

Polly agreed that those criticisms were ridiculous. He pointed out:

“Nobody can ever get a band together and analyse the sound before you make it. You’ve got to let people who listen to it do the analyzing. A lot people are that if you sell singles you are being commercial, well you are also if you are selling albums.

“It’s a bit snobby to criticise groups who sell a lot of singles because you are saying that people who buy singles are morons. That just isn’t true.

“The way I see it, if you sell a lot of singles people are going to listen to your albums. Previously, they would only do that if they had seen you on stage.”

Family want to appeal to as many people as possible. Rob was very enthusiastic about the audiences they have drawn in concert.

“The difference in age groups, you just wouldn’t believe. We’ve had guys there with their kids, the hairies, 15-year-old chicks, the whole scene. That’s where it’s all at. Music is just to be played – just to be enjoyed.”

Enjoy the music – forget the barriers. That’s what it’s all about.