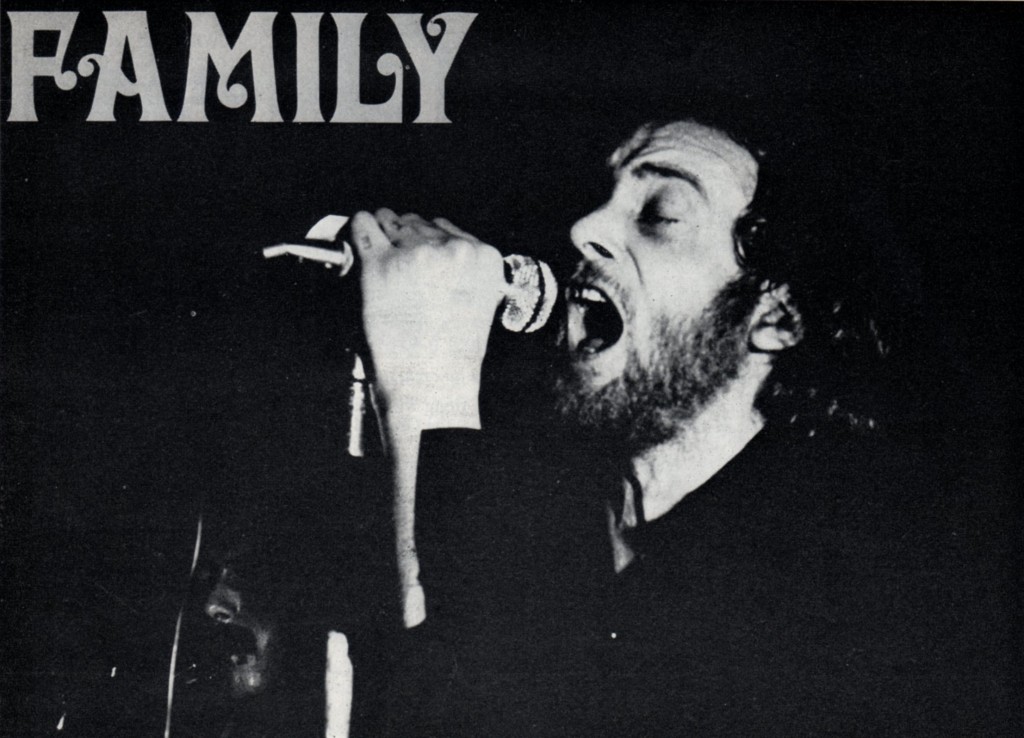 It started off with a piece of wistful violin with penny whistle coming in after that with a touch of drums. All very melancholic. And then it began to build up and up until it wa all there, wild rocky and the fuzz box working overtime. The singer wa leaping, arms winging into the chandelier just above his head, the sax player was blowing, the drummer enjoying a good ba h at his kit laying it down. The music surged louder and louder and then … calm again with a return to the violin.

The Family had got their first set at Klooks Kleek in West Hampstead off to a fine start and it wasn’t lost on the audience, even those overflowing out the door toward the bar.

I don’t enjoy seeing families as a rule, but I was looking forward to seeing the Family again, having only vague and hazy memories of them at Middle Earth in Covent Garden early last year when my mind was elsewhere anyway. And I was not disappointed. I was wondering how they would sound on stage, for I couldn’t imagine them getting the kind of sound they have on their first LP Doll’s House with all its orchestration and, I imagine, planning and thought. But on stage planning and thought inevitably give way and spontaneity takes over after a while, and that was what happened.

The Family can either zapp it out or create a mood, and they do both with a distinctive style that can only be the Family due to lead singer Roger Chapman’s unique voice. He’s pleased that his voice is immediately recognisable and seemed a little surprised when I said this to him. “I used to be on a Ray Charles and country blues thing. Charles really knocked me out. Then I was singing other people’s songs and my voice was completely different. It changed when I started doing my own songs which is bound to happen, because with your own material you need to develop your own phrasing instead of copying someone else.”

Along with lead guitarist John Whitney and bassist/violinist Rick Grech, Rog writes most of the group’s material, his particular contribution being lyrics. Completing the line up are Jim King on sax and piano, and drummer Rob Townsend who sits and bounces as he plays and in fact does a lot more for the group than you might gather from Doll’s House where the drums don’t come through too strongly. He lays down a strong and interesting beat which is there holding the group together a they go their various ways in their musical explorations.

The group, who all hail from Leicester, had been playing professionally for orne year in various groups before coming together as the Family. Rick and Roger used to work together in a group called the Exciters. Rog told me, “It was hard rock. It’s not that important, but those were good days. Yes, there were no hang ups then but when you get older things aren’t so simple. A lot of the scene is taken too seriously. Groups feel that if a thing is not the exact way they want it that it’s not right.

The group are in America, a from the end of this month for an eight week tour which will help their new album Family Entertainment along, which is being released in the U.S. to coincide with the tour. “This is the first time we’ve done a proper tour abroad although we’ve been to Italy, Holland, France and other places on the Continent,” John Whitney told me. “But they were just odd days, whereas this is a whole tour New York, San Francisco, Philadelphia, over the whole country. We’re doing what amounts to an accepted circuit for English groups going over there. Needless to say, we’re looking forward to it.”

John, who plays a double-necked Gibson- “I can use 12 or 6 string as I like” told me that the group are getting into new things on stage a lot more now than they have done before in the eighteen months or so that they have had the present line up. “We’re improvising a lot more now and it all happens very well. Most English bands can be classified as either blues or rock or something else, but although we are
blues-based I don’t think we can be classified.”

While they are in the States Family hope to record part of a two-record album set, the idea being that half is recorded live at the Filmore West and the other half recorded over here. If this happens it should be an interesting follow up to Family Entertainment released in Britain last month.

One interesting point about the album : Summer 67, the instrumental track on side one, was not intended to be an instrumental at all , but the group felt it stood without the vocal track that had been recorded and so it stands without words. “It was being overshadowed by the instrumental,” said Rob, “and so we left it off.”

The group are all fine instrumentalists in fact. Jim King, a musician through and through, plays a fine sax and clarinet, and Rick Grech, basically a bass guitarist for the last three years, gives the group much of their distinctive sound with his electric violin. Rick used to play with the Leicester Youth Rhapsody Orchestra, “but I lost the technique and everything so when I picked up the violin again I was approaching it more or less fresh. I like the violin because it give a different dimension , especially on passages in a minor key. It gives a good mood.”

And Family certainly created a good mood at Klooks Kleek, as they no doubt will as they tour the States.